Samsung is pretty much the only company that continues to offer high-end Android tablets, and the new Galaxy Tab S4 is the most premium to date. Basically Samsung is positioning this new tablet as a 2-in-1 device that could even replace a laptop (in some situations).

The Samsung Galaxy Tab S4 features a Samsung S-Pen for writing, drawing, and other actions, a high-resolution display, a fast processor, and a DeX mode that lets you run Android applications in a desktop-style environment.

The Galaxy Tab S4 is available starting today for $650 and up. That price includes the S Pen, but it doesn’t include Samsung’s optional $150 Book Cover Keyboard, which is sold separately. 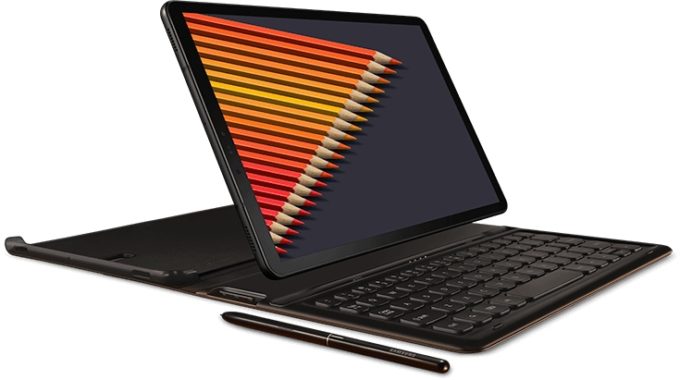 The tablet has a USB 3.1 Type-C port for charging and data, as well as POGO pins for the optional keybard cover.

On the back there’s a 13MP camera with autofocus support, and on the front there’s an 8MP fixed-focus camera.

It has a 7,300 mAh battery and fast charging support, and Samsung says you should be able to get up to 16 hours for video playback time, which is up 4 hours from the estimate for the older Galaxy Tab S3.

There’s no fingerprint sensor, but the tablet supports iris scanning for biometric authentication if you don’t want to stoop to something as archaic as using a PIN, pattern, or password.

The tablet’s DeX mode can be fired up from the Quick Panel or when you connect a keyboard cover. It enables support for running apps in multiple windows that you can resize and move around the screen, much as you would in a desktop operating system such as Windows, macOS, or Ubuntu.

You can also use an HDMI to USB-C adapter (sold separately) to connect a Galaxy Tab S4 to an external display to view your apps on a big screen while using the tablet as a trackpad or input device for sketching images or creating handwritten notes.

So what do you think? Would you pay $649 or more for these features? Or would you rather spend your money on an iPad Pro, a Surface Go, or a real laptop?