As expected, Samsung is updating it smartwatch lineup with a new model that… looks a lot like its last model, but which has a brand new name.

The Samsung Galaxy Watch will replace the Gear S3 in the company’s wearable lineup. And despite rumors that the phone would run Google’s Wear OS software, it will ship with Samsung’s Tizen operating system, just like every other Samsung smartwatch released in recent years.

The Galaxy Watch will come in two sizes: a 42mm version will sell for $330 and up, and a 46mm Galaxy Watch will set you back $350. Both will be available starting August 24th, which is the same day the new Samsung Galaxy Note 9 smartphone ships. 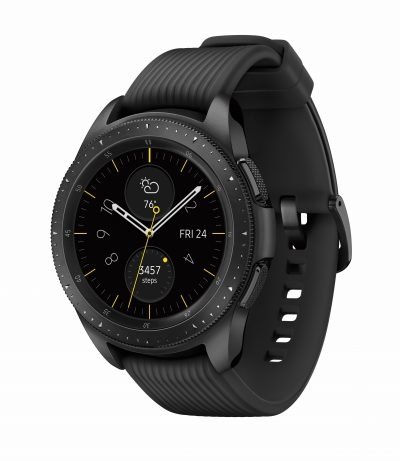 The 42nm watch has a 1.2 inch circular display and comes in a choice of black or rose gold colors. It has a 20mm wrist strap and a 270 mAh battery.

They both support wireless charging, and you can use them with Samsung’s new Wireless Charger Duo, which lets you charge a Galaxy Watch and a Galaxy smartphone at the same time.

Other features include 802.11b/g/n WiFi, Bluetooth 4.2, NFC, and A-GPS. The watches are IP68 water resistant and MIL-STD-810G tested for ruggedness.