The RED Hydrogen One is a high-end phone with support for modular add-ons such as premium camera lenses. It has an unusual design with ridged sides and a rough texture on the back, and the phone has a “holographic” display with support for glasses-free 3D effects.

It went up for pre-order earlier this year and now RED says it hopes to begin shipping phones to customers who have already ordered one starting October 9, 2018. But that’s just one of a few new release dates the company has revealed. 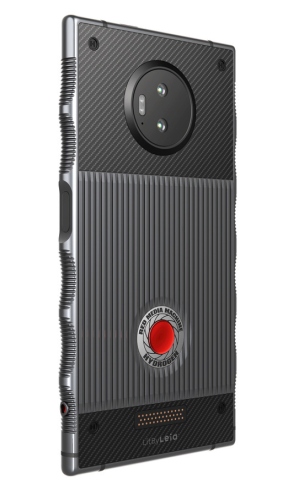 On November 2nd the phone will be available from US wireless carriers AT&T and Verizon and Mexican carrier Telcel.

Customers who pre-ordered the black aluminum model will also be among the first to receive their phones, with titanium models coming later.

Want to get a phone before October? RED will make a Houdini Developer’s model available from August 31st through September 11th. It will ship with pre-release firmware and RED is asking customers who buy this model to help find bugs… and not to complain about the phone publicly until it receives a firmware update so that it’s running the same software that will be available on the models shipping later in the year.

That seems like a fairly reasonable request… but RED seems to be taking a pretty firm approach toward enforcing that request: the company says anyone who buys a Houdini device can publicly share pictures of the phone, camera samples, or positive comments. But the company says it reserves “the right to brick the device if used for any purpose other than giving us constructive feedback.”

I mean, I get that RED is basically selling this as a beta device and doesn’t want people complaining about how horrible it is based on pre-production software, since that could have a negative impact on sales. But charging folks more than $1,000 for a phone and then bricking it because someone complains about it on Twitter seems a bit severe.

All of which is to say, you probably won’t see detailed reviews of the RED Hydrogen One until October at the earliest… and if you don’t plan to help troubleshoot software problems you probably shouldn’t try to get your hands on the limited-edition Houdini model.