A few months ago we heard that the upcoming LG V40 ThinQ smartphone might have a total of 5 cameras, and sure enough the first rendered images of the phone do indeed show a device with three cameras on the back and two on the front.

The folks at MySmartPrice have posted front and rear images of the phone, which they say will launch November 16th. 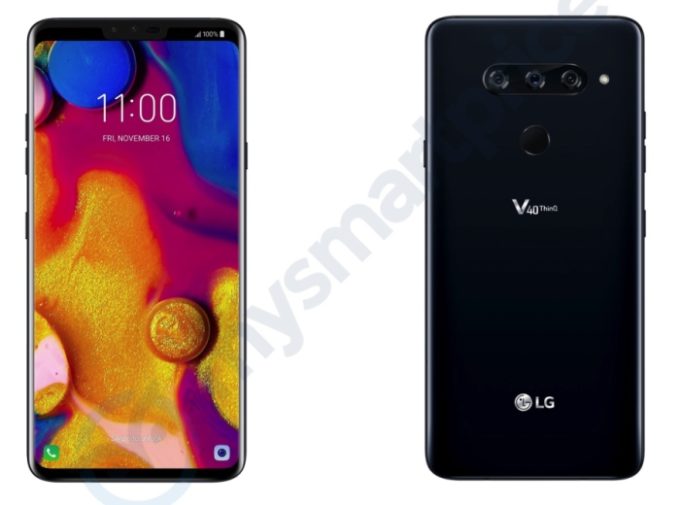 While the leak doesn’t included detailed specs, MySmartPrice does does note that the phone has a P-OLED display with curved edges, a notch in the top of the screen (which is hidden by black bars in the pictures), a USB Type-C port, a 3.5mm headphone jack, and a fingerprint sensor on the back of the phone, below the cameras.

Everything else is pretty much guesswork. While dual front cameras could be used for bokeh-style effects, it’s also possible that the second camera is used for some sort of face-scanning, face unlock features. The multi-camera setup on the back of the phone, meanwhile, could enable depth effects. But one or more of the lenses might offer wide-angle or telephoto features, among other things.

This wouldn’t be the first phone with three rear cameras, after all. That honor goes to the Huawei Mate P20 Pro, which features a 40MP primary RGB lens, a 20MP monochrome lens, and an 8MP 3X telephoto lens.

There are still no details about the phone’s processor, memory, storage, battery, or other specs.