If you don’t count the Intel “Skull Canyon” and “Hades Canyon” NUCs, which are larger models aimed at gamers, the new Bean Canyon systems are the most powerful NUC mini computers to date.

Intel started talking about the little PCs earlier this year, and the company revealed detailed specifications last week. Now the first Bean Canyon systems are up for pre-order, and the folks at distributor SimplyNUC say the computers should begin shipping in mid-September. 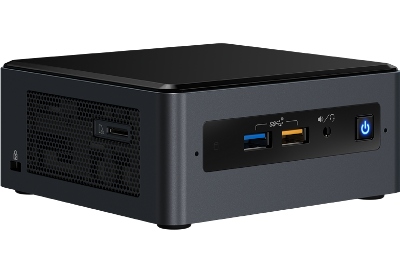 According to SimplyNUC, the Core i7 models will be the first to ship. Core i5 and Core i3 models should begin shipping about a month later, in mid-to-late October.

The distributor is already taking pre-orders for pre-configured systems for $490 and up. That starting price gets you a model with an Intel Core i3-8109U processor, 8GB of RAM, and 128GB of solid state storage, but no operating system. You can pay more for a faster processor, Windows 10 Home or Pro, and more RAM or storage.

Or if you already have some of the components you’ll need, you can save some money by picking up a barebones model that doesn’t have any RAM or SSD. Prices start at $274 for a barebones kit with a Core i3 processor.

Since the new models have 28 watt chips, Intel has also included a 90W power adapter and improved cooling system with vents on the left and right sides of the chassis. So the Bean Canyon NUC looks pretty much the same as the previous-gen Baby Canyon NUC from the front and back, but a bit different from the sides.

Bean Canyon NUC models also have an updated microphone setup with support for far-field voice detection and a dedicated chip for always-listening wake words, allowing you to wake a system from sleep by saying “Alexa,” “Hey Cortana,” or another voice command to trigger a voice assistant.