The GPD Pocket 2 isn’t really designed for gaming. But since the pocket-sized laptop computer has the same processor as the GPD Win 2 which is designed to run video games, I figured it should be capable of handling at least some gaming tasks.

Over the weekend I spent a few hours playing StarCraft II, and I’ve dabbled with a few other games. The computer does get pretty hot while gaming, and the battery does run down more quickly when gaming. So I figured I’d kill two birds in one video and do a gaming/battery life video.

The video quality isn’t stellar: I did YouTube live stream using a webcam, and I didn’t notice the low frame rate until someone pointed it out. Next time I plan to do a live stream I’ll probably use my phone instead.

Anyway, the video is long… the first 7 minutes include an intro and a quick look at a few games. Then I play StarCraft II for about a half hour and then do a battery level and CPU temperature check around the 37 minute mark.

The battery level indicator had dropped to 76 percent, indicating that you could probably get around 2 hours of battery life before while playing CPU and GPU-hogging games like StarCraft. The CPU temperature as also in the 150 to 160 degrees Fahrenheit range.

After I closed the game and returned to less resource-intensive tasks like document editing and web browsing, the temperature dropped to about 110 degrees, the chassis got cooler, and the battery level stopped dropping quite so quickly.

I haven’t run extensive tests of battery life, but I expect you could probably get closer to 4 hours of run time with mixed use (not gaming), and maybe even more than that if you dim the display and turn off the WiFi and Bluetooth while watching videos or editing documents. 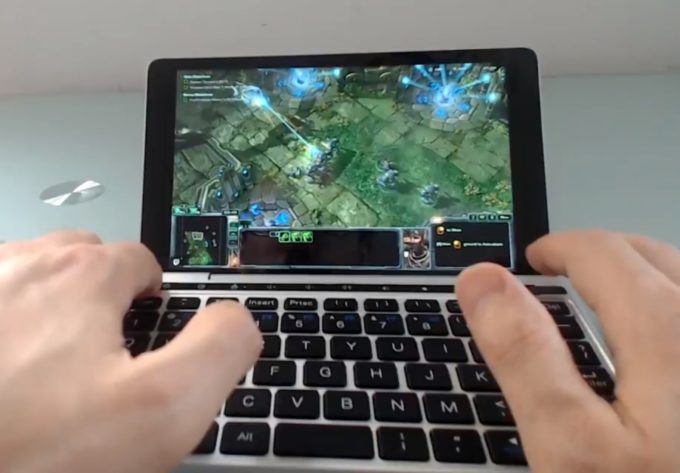 For the rest of the video, I answered some questions from folks in the live stream and demo a few features. If you’ve been paying attention to Liliputing’s previous coverage of the GPD Pocket 2 I don’t know how much will be new to you. But if you want to see how easy (or tough) it is to play games using a computer with a 7 inch full HD display, a tiny keyboard, and an oddly placed touch sensor and mouse click buttons, now’s your chance to find out.

I will say that because of the tiny keyboard I wouldn’t necessarily recommend using this computer for first-person shooters or other games that require lightning fast reflexes unless you plan to plug in an external game controller, mouse, or keyboard.

But point-and-click adventure games, turn-based strategy games, and even some real-time strategy games are certainly playable… especially if you’re a mediocre gamer like me. I’m sure if I had been playing against a halfway decent human, I would have lose that StarCraft II match in no time flat. But while it took longer than it should have, I did actually complete the mission in a half hour.

It’s also worth noting that while both the GPD Pocket 2 and the GPD Win 2 have Intel Core M3-7Y30 processors, the Win 2 has it set to run as a 7 watt chip, while the version in the Pocket 2 is running as a 4.5 watt processor. So not only does the Win 2 have physical gaming buttons and a design that makes the whole thing easier to hold in your hands while playing, but it will also probably offer better gaming performance.

The Pocket 2, meanwhile, is meant to be more of a general purpose computer. It just happens to be capable of running some games… and one of the quickest ways to run down the battery is to use it for that purpose.