One of the tricks web designers can use to speed up the loading of web pages and cut down on the amount of data sent to your device is something called “Lazy Loading.”

Instead of loading all web content as soon as you visit a page, lazy loading means that some content (usually images) will only be loaded when you scroll down the page to where that content is supposed to be viewed. If you don’t scroll down, the images never load. And since less content needs to be loaded all at once, the stuff you do see should load more quickly. 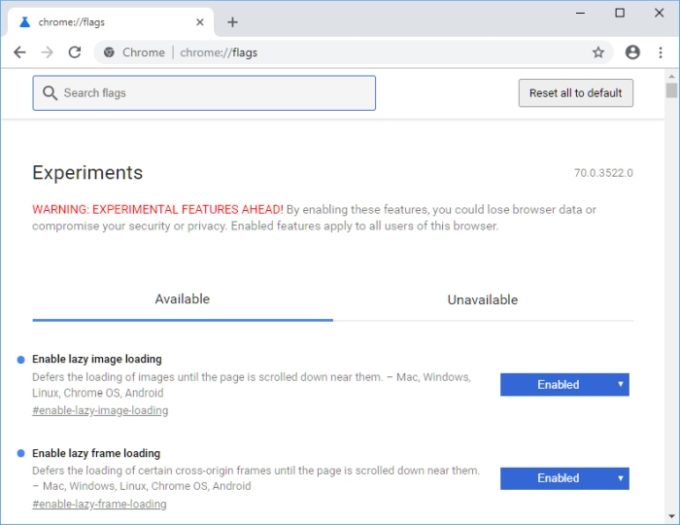 Chrome Canary is the experimental version of Google’s web browser which gives uses an early look at upcoming features… but which also tends to be pretty buggy. So it’s useful if you want to test and help troubleshoot new features, but probably not the best option if you’re looking for a stable web browser.

With that warning out of the way, here’s how to give lazy loading a try. Install Chrome Canary, run it, and then look for the following flags:

Flip the toggle so it says enabled for one or both those tabs, click the button that asks if you want to relaunch the browser, and you should be good to go.

Now when you visit web pages, image and/or iframes will not be loaded until they’re supposed to be visible on the screen. This will help web pages load more quickly and it should reduce the amount of data used when you only read the beginning of an article or view the top of a web page.

It does mean that if you scroll quickly, you might see some content load a split second after you move down the page. But it’s up to you to decide if that’s more annoying than web pages that load slowly.

You probably won’t see much difference on sites (including Liliputing) that already use lazy loading for images. But the feature could come in handy when visiting pages that currently load everything as soon as you visit.

Google is reportedly working on a new web standard that will allow web designers to override the browser defaults if there’s an iframe or other element that should not be loaded lazily.

According to Bleeping Computer, Google originally designed this feature for its mobile version of Chrome, but decided to bring it to desktop as well. That took a little extra work, since features like “print” and “save page as” require the browser to override the lazy loading feature and render all on-page content before sending it your printer or saving a PDF.