Dell has been giving a lot of attention to its XPS, Alienware, and Precision laptops in recent years. But this fall the company is refreshing its mainstream Inspiron lineup by bringing some premium features to its mid-range laptops.

The new Inspiron 13 7000 series 2-in-1 is getting a spec bump with support for Intel’s new Whiskey Lake-U processors. But it also now feature an all metal chassis, narrow top and side screen bezels, and improved cooling. It also has a spill-resistant keyboard and a precision touchpad.

Dell did manage to keep the camera above the screen, wagering that mainstream customers are willing to trade a slightly thicker bezel for a better camera placement than you’ll find on the XPS 13 (which has a super-slim top bezel, but a camera that’s awkwardly placed below the screen).

The Dell Inspiron 14 5000 series 2-in-1, meanwhile, is also getting an updated design and new features including slightly slimmer side borders, 8th-gen processor options, and improved thermal routing borrowed from the 7000-series. 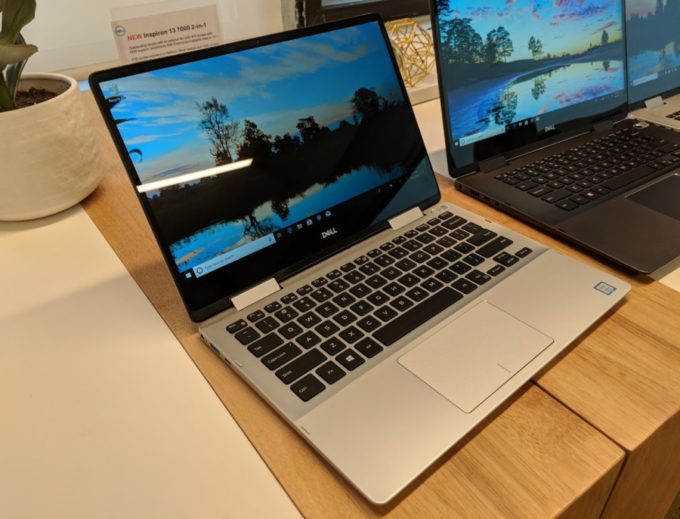 Dell is updating all of its 7000-series laptops including ts 15 and 17 inch models. But as usual, I’m most intrigued by the smallest of the bunch.

The 15 inch model has similar specs to its smaller sibling, but it’s available with optional NVIDIA GeForce MX150 graphics with 2GB or 4GB of GDDR5 memory and it supports both an M.2 PCIe NVMe SSD and a 2.5 inch hard drive. Dell will offer dual storage configurations, and some models will include Intel Optane memory plus a hard drive.

The Dell Inspiron 15 7586 2-in-1 measures 0.6 inches thick and has a starting weight of 4.4 pounds. Models with full HD displays will come with a 42 Whr battery, and customers who opt for a 4K display will get a higher capacity 56 Whr battery.

Dell also offers a 17 inch model that comes standard with NVIDIA GeForce MX150 (2GB) graphics and a 56 Whr battery. That model also has dual storage support, but it does not support pen input and there’s no 4K option. It’s also a substantially heavier machine, weighing in at 6.4 pounds. But it’s still just over 0.6 inches thick.

The Inspiron 14 5000 comes in two configurations.

Both feature Whiskey Lake-U processors, but unless your budget is super-tight, I’m not sure why you’d opt for the bigger, heavier model with the lower-resolution display and limited viewing angles. So let’s just take a look at the more interesting 5482 model.

In addition to slimmer borders, Dell has added a metal top to the keyboard area, offered an optional fingerprint sensor, and added a USB Type-C port. The lid and base of the laptop are still plastic though.

Here’s a run-down of the specs/options