It’s called the FS-FP5V and while it’s positioned as a board that can be used for digital signage, kiosks, point-of-sales, thin client, or other commercial applications, it’s basically a fully functional mini PC capable of running Windows, GNU/Linux, or other operating systems.

One potential application listed on the Sapphire website is “electronic gaming machines,” which isn’t surprising since handheld gaming startup Smach hopes to use similar hardware for its Smach Z (if it ever sees the light of day). 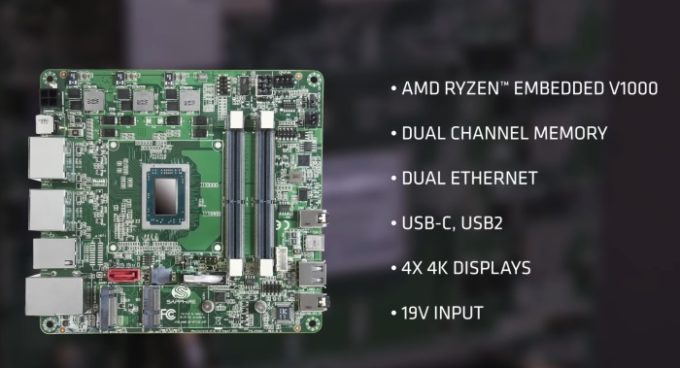 The board measures about 5.8″ x 5.5″ and Sapphire is also showing off a few cases from Bleujour that are built for the little computer.

While it’s easy to add your own memory or storage, thanks to the M.2 connectors and SODIMM slots (which support DDR4-3200 dual-channel memory), the processor is soldered to the board.

AMD offers four different Ryzen Embedded V1000 chips, with power consumption ranging from 12W at the bottom end to 54W at the top.

I haven’t seen any pricing details for the FS-FP5V yet, but if you’re looking to get your hands on something very similar, the UDOO BOLT has a similar design (it’s a littler smaller, has some different ports, and is aimed at hardware hackers thanks to its Arduino-compatible hardware and accessible GPIO, UART, andother pints).

The UDOO BOLT is up for pre-order for $229 and up through a Kickstarter campaign… but the UDOO BOLT isn’t expected to ship until December.