Microsoft may have gotten out of the digital music business by killing its Groove Music app, but the company continues to sell movies and TV shows through the Microsoft Store.

There’s one small catch though: you can only watch them on Windows devices including a Windows PC, a Windows 10 Mobile phone, or an Xbox game console. So if you want to watch on an Android phone, an iPad, or a smart TV, you’re probably better off avoiding the Microsoft Store for digital video sales for now.

But soon you might able to buy videos from Microsoft and watch them on other platforms: Windows Central reports that Microsoft is developing Movies & TV apps for Android and iOS. 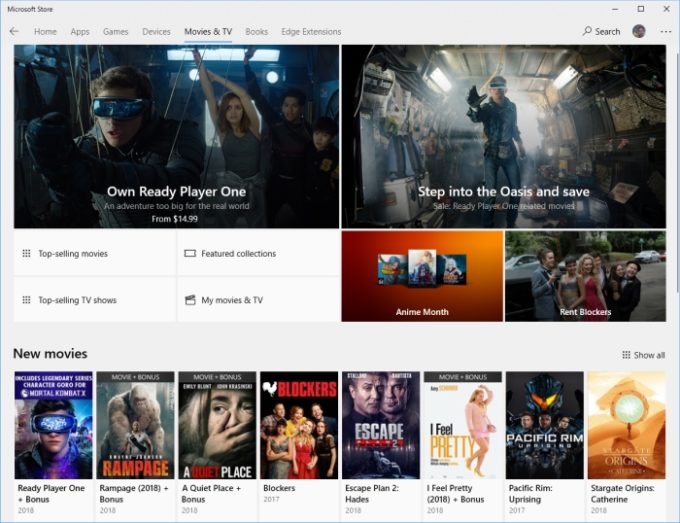 That would allow you to stream (and possibly download) videos on iPhones, iPads, and Android phones and tablets, among other things. It’s unclear if Apple TV, Chromecast, or Android TV would be supported, but I imagine it’s in Microsoft’s best interested to make its content available on as many platforms as possible.

With that in mind, Windows Central says Microsoft is also getting ready to announce support for the Movies Anywhere program, which lets you link your accounts with multiple stores so that, for example, if you buy a movie from the Microsoft Store, it would also be added to your Google Play, iTunes, or Amazon Prime Video libraries.

Honestly, if Microsoft is planning to support Movies Anywhere, then you probably don’t need to download a dedicated Movies & TV app for Android or iOS. Just link your Google Play and/or iTunes accounts and any media you buy from the Microsoft Store will be available on your mobile device or media streamer.

But I can’t really blame Microsoft for launching mobile apps: it’s likely that a lot of people don’t even realize that the company does sell TV shows and movies, so making its own apps available across all platforms could help raise visibility for the company’s store.

On the one hand, the whole thing does sound like something the modern Microsoft would do: instead of attempting to convince people to buy Windows phone,s the company has largely admitted it’s lost that battle. Instead, Microsoft has been cranking out mobile versions of its apps that run on Android and iOS as a way to make it easy for people to use Office, Bing, and other Microsoft apps on the device they’re already using.

On the other hand, I wonder if it’s also a semi-desperate attempt to convince people to buy digital media from the Microsoft Store. Discontinuing Groove Music probably wasn’t that hard a decision: anyone who purchased MP3s would get to download them and keep them forever, and anyone who was paying for a streaming subscription wouldn’t have expected it to continue working once the service was canceled.

But while most digital music download services switched to DRM-free music years ago, most companies that sell TV shows and movies online still use DRM. So if Microsoft were to just pull the plug on its Movies & TV apps and storefront, the company would still need to maintain some sort of DRM verification service in order for customers who had already paid for content to be able to continue watching it.

Launching Movies & TV apps for other platforms could help increase Microsoft’s customer base. Joining Movies Anywhere could too… but it could also provide an escape hatch. If Microsoft eventually decides to stop selling TV shows and movies, the company can suggest customers link their accounts to another Movies Anywhere service by a set date in order to make sure they can continue to access videos through another service.

10 replies on “Report: Microsoft Movies & TV coming to Android, iOS, and other platforms”