The first laptops with 10nm Intel chips are already shipping… but so far they’re nothing to write home about. While the company has started producing a few processors based on the new “Cannon Lake” architecture,  they seem to be low-power, low-performance chips that offer little to no benefit over the company’s existing 14nm processors.

That could change next year, when the company is expected to begin mass production of 10nm chips with the goal of making them available for computers that will ship in time for the 2019 holiday season. 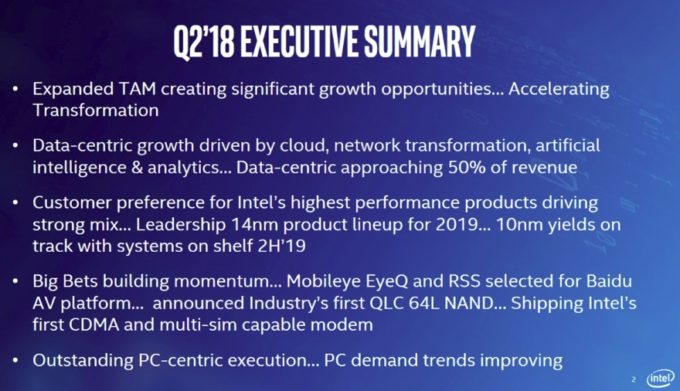 As spotted by AnandTech, Intel commented on the ramp up in 10nm chips during a quarterly earnings call yesterday afternoon.

The company still isn’t saying much about what we can expect from the chips scheduled to ship next year, but generally speaking the move to a smaller manufacturing process tends to lead to greater efficiency and performance.

Intel has been promising to move from 14nm to 10nm for several years, but the company has had trouble manufacturing 10nm chips and has delayed their launch several times over the past few years.

With increased competition from AMD, Intel can’t exactly sit still. So the company is still planning to launch a new line of 14nm processors based on the new “Whiskey Lake” architecture this fall. The company hasn’t provided many details yet, but a few leaks give us an idea of what to expect from some of the first 15 watt Whiskey Lake-U chips for laptops, including:

All three chips are expected to feature Intel UHD Graphics 620 and it seems like they’ll have more cache memory than their Kaby Lake Refresh counterparts… but these are still being branded as 8th-gen Intel Core processors, and the model numbers are a pretty good indicator that you should probably only expect modest improvements over existing chips chips such as the Core i3-8130U, Core i5-8250U, and Core i7-8550U processor

via /r/Intel, wccftech, NotebookCheck, and AnandTech