A couple of months ago HTC announced that it was working on a blockchain smartphone called the HTC Exodus. Now the company has posted a website for the phone, and while it’s short on details, HTC says it’ll offer an “early access” version of the phone in the third quarter of 2018.

With dedicated hardware that allows you to use the phone as a cold wallet for your cryptocurrency, and software for decentralized apps, HTC says every Exodus smartphone will also serve as a node, which the company claims could “double and triple the number of nodes of Ethereum and Bitcoin.” You know… if anyone actually buys the phone. 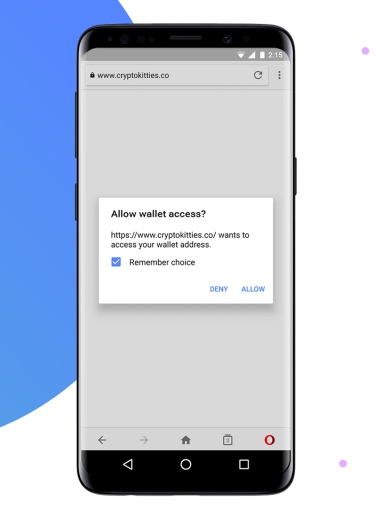 Unsurprisingly, the new app is called Opera with Crypto Wallet and its available in private beta for now.

The browser supports Ethereum Dapps (decentralized apps), allowing you to pay for goods and services uses the Ethereum currency. Opera says it chose Ethereum because it has a large community of Dapps and features a Web3 API that allowed the company to integrate the technology into the browser in a way that makes it easy for users to send money to other wallets or make payments to online merchants that use the Coinbase Commerce system.

Eventually the company could add support for other digital currencies.

In terms of security and privacy, Opera says the keys are all stored on a user’s phone and users need to grant permission for each site requesting access to a wallet.

Instead of a PIN code or password, Opera says the browser “relies on Android’s secure system lock to sign transactions so users don’t have to learn any new codes to use the wallet.”

Both HTC and Opera are obviously betting on a future that may or may not arrive. While cryptocurrencies have become a multi-billion dollar business in recent years, they still have a relatively small user base. It’s possible that user-friendly devices and apps like the HTC Exodus and Opera with Crypto Wallet could lower the barrier for entry. But it’s also possible that HTC and Opera will find out that they’re spending time developing niche products for a niche audience with limited potential for a return on investment.

Update: Shortly after I hit the publish button, another blockchain phone-related story popped up. Sirin Labs has revealed that its $1,000 Finney phone will ship in November, and that the phone has a secondary screen that will be used exclusively for secure crypto transactions.