Google is slowly starting to add support for running Linux applications on Chromebooks. But as I discovered when I tested Linux apps on the Acer Chromebook Tab 10 recently, it’s still a work in progress. The feature also isn’t available for all Chrome OS computers yet.

That could change in the not-too-distant future. Right now you need to be running Chrome OS in the developer channel in order to enable Linux app support. There are signs that Linux app support could hit the Chrome OS beta channel this week, and it could graduate to the stable channel by the time Chrome OS 69 is released later this year.

But… what if you want to try Chrome OS + Linux app support and you don’t have a Chromebook or Chromebox? You could just build your own.

After taking Linux app support for a spin on an HP Chromebox G2, Ian Morrison wanted to see if he could use the software on a different computer. So he installed Chromium OS (the open source version of Chrome OS) on a Vorke V5 Plus mini PC (currently available for $150 from AliExpress) and found that Chromiume OS also supports Linux apps. 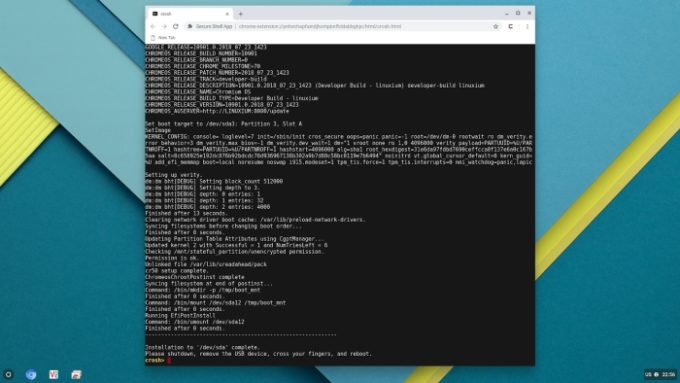 For years, Chrome OS users have been using a tool called Crouton to install fully functional GNU/Linux desktop environments such as Ubuntu or Debian alongside Chrome. But while Crouton makes it possible to install and run desktop Linux software on a Chromebook, you need to switch to a less secure developer mode to use it, and Linux runs in its own desktop environment, which means you have to switch back and forth between Chrome OS and Linux.

The new Linux app feature in Chrome OS uses a new tool that Google calls Crostini. Linux is installed in a virtual machine/container system that allows you to install and run Linux applications almost as if they were native Chrome OS apps. They’ll show up in your launcher and they run in windows that can be viewed at the same time as Chrome OS windows.

Morrison notes that the steps for enabling Crostini/installing Linux are pretty much the same in Chromium OS as they are in Chrome OS. But there are a few key differences between Chromium and Chrome.

Not only is one open source, while the other is not, but Chromium OS doesn’t support Android applications, Adobe Flash, or Widevine CDM. It also doesn’t support automatic updates.

So if you decide to build your own Chrome OS/Crostini device, you’ll need to download and install security and feature updates manually.

It’s also worth noting that, at this point, you can’t use Linux apps if running from a LiveUSB. You’ll need to install Chromium OS to the computer’s built-in storage. So make sure to backup any important files that you don’t want to lose before installing Chromium.

Right now I’m not sure there’s much reason to run Chromium OS with Crostini on a laptop or desktop other than for testing purposes. But in the future it could be an interesting option for folks that want to build their own Chromebox rather than buying an off-the-shelf model, but who also want the ability to run desktop Linux applications such as GIMP, LibreOffice, Kdenlive, Handbrake, or Ardour.