When I published a review of the One Mix Yoga mini laptop from One Netbook last month, I noted that the 7 inch mini laptop had a lot of promise for folks that were looking for a pocket-sized convertible PC with tablet and laptop modes and a full version of Windows 10. But the prototype I was testing had a few showstopping issues.

After I finished the review I boxed up the One Mix Yoga and sent it back to the folks at GeekBuying, who then sent me a retail version of the little laptop. The store is currently selling the One Mix Yoga for about $475.

I’m happy to say that all three of the problems I had with the prototype have been resolved.

The computer has a touchscreen display and an optical touch sensor that you can use instead of a touchpad. There are left and right mouse buttons below the space bar. And there’s also support for a pressure-sensitive digital pen.

On one side of the computer you’ll find a micro USB port (for charging), a USB 3.0 Type-A port, a USB Type-C port, a micro HDMI port, a headset jack, and a microSD card slot. On the back there’s a vent, and on the bottom there’s a speaker. 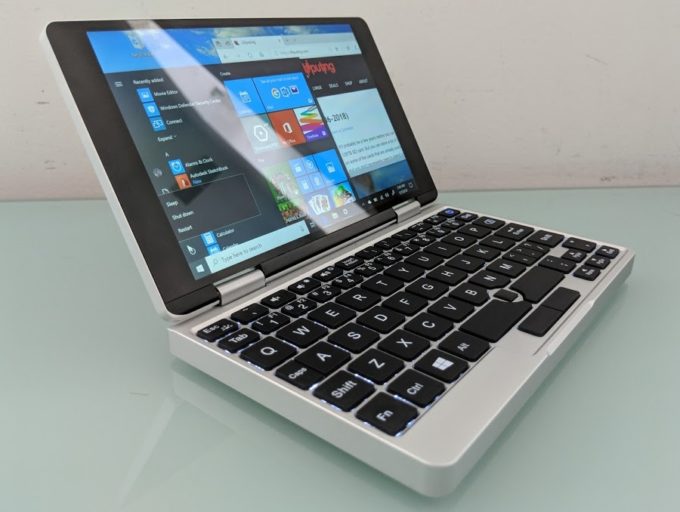 All of those things were true of the prototype, and they’re all true of the retail version. Here’s what’s new:

That last one caused most of my headaches with the prototype. Every time I tried to put the computer to sleep it just turned off. That meant it would close any currently running programs and I might lose any data in documents I hadn’t saved. Closing the lid caused the computer to turn off. Pressing the power button made it turn off. And using the Windows Power menu to put the system to sleep also made it shut down.

Now I can put the One Mix Yoga to sleep using any of those methods — although I still recommend going into the Power settings and choosing “do nothing” for what happens when you press the power button. Otherwise you might accidentally hit it while using the One Mix Yoga in tablet mode and put the computer to sleep while you’re using it.

The One Mix Yoga is still a device aimed at a niche market: it has a sluggish processor that makes the computer feel pretty slow when you’re doing anything more than running one app at a time. And the small keyboard feels a little too cramped to use for any heavy-duty work.

If you already have a laptop and a tablet, you might be better served with your current hardware.

But if you really want a pocket-sized Windows 10 convertible, the One Mix Yoga doesn’t really have any competition. The closest thing you’ll find is the $500-ish GPD Pocket, but that laptop doesn’t have a 360-degree hinge, backlit keyboard, or pen support (although it does have a faster processor).

The One Netbook One Mix Yoga is available from Geekbuying for $476 (oddly it’s cheaper to buy it with a digital pen than without one right now).