Google is said to be working on at least two new Pixel phones (and possibly a lower-priced third model). Now we have a pretty good idea of what the largest of the bunch looks like, thanks to a series of leaked photos posted to the xda-developers forum and portal.

Long story short, expect a notch, a chin, and an overall design that’s just a bit different from the current Pixel 2 XL.

The phone appears to have a fingerprint sensor and a single camera lens on the back, a display cut-out that wraps around a dual front-facing camera setup, and a glass back.

There’s still a sort of two-tone design on the back of the device, with a darker, shinier portion at the top and a matte section covering the rest of the device. Some folks are wondering if the move to a glass back means the Pixel 3 XL will support wireless charging… but it could just be an aesthetic choice or one that’s designed to offer better wireless reception.

In the place where you’d normally find a Google logo, there’s a small image showing a sort of broken circle with a line through it. As 9to5Google reports, this does seem to be a picture that’s been used on other Google prototypes in the past, lending credence to the idea that these photos are legitimate.

There’s no guarantee that this is what the Pixel 3 XL will look like when it launches. We may be looking at an early prototype or just one of several designs the company is considering. But it certainly seems like this is a Google device. 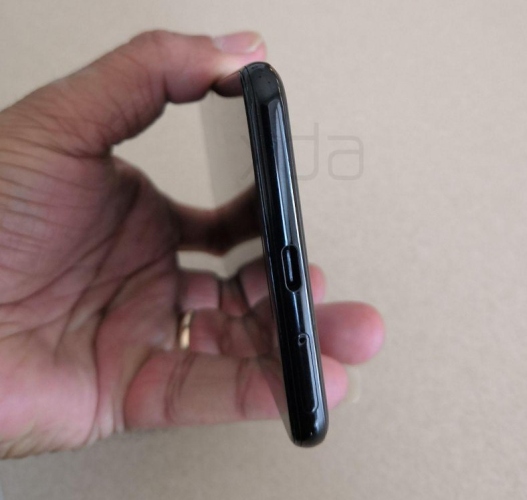 Other features depicted in the images including a USB Type-C port on the bottom, along with a SIM card slot, a front-facing speaker, and no visible headphone jack.

The pictures also seem to confirm that the phone is code-named “Crosshatch” and that at least one model may ship with 4GB of RAM and 128GB of storage. It seems likely that we can also expect a Qualcomm Snapdragon 845 processor.