A few years ago I took a Kano Computing Kit for a spin. And this evening I got a look at another kit called Piper. 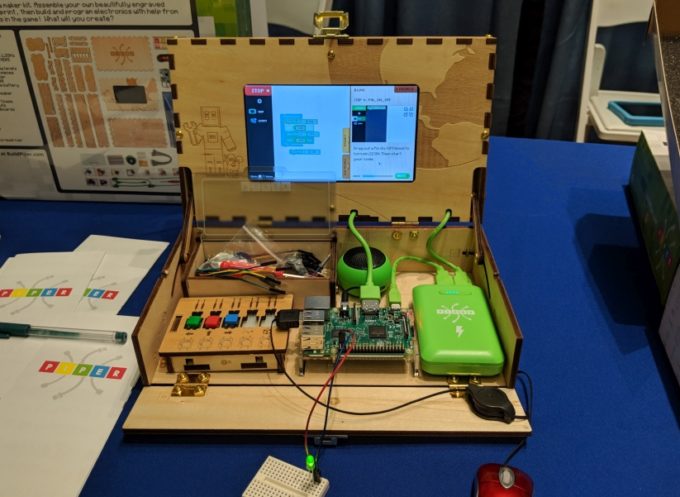 The Piper Computer Kit is sort of a cross between a 3D puzzle, a personal computer, and a DIY electronics kit.

Inside the box you’ll find a Raspberry Pi 3, a 7 inch, 800 x 480 pixel display, a 6,000 mAh rechargeable battery, a speaker, and a microSD card with the operating system and educational software pre-installed. But there are also 3 electronic breadboards, 9 switches, 25 jumper wires, a bunch of buttons, buzzers, lights, and cables, and 24 etched wooden pieces that you assemble together to build the case.

All told, there are more than 160 pieces in the kit, and by the time you put everything together you should have a pretty good idea of how the components work together. The Piper Kit does come with a large blueprint poster that should help with the assembly.

Piper is designed for kids between ages 7 and 12 and comes with a few components that are probably easier to use if you have kid-sized hands, including a tiny USB mouse and a rather small screwdriver.

When assembled, you’ve basically got a fully functional computer, but for some reason Piper decided not to include a keyboard. Since the Raspberry Pi’s USB ports are accessible though, you can always plug in one of your own.

The Piper Kit started off as a Kickstarter project in 2015, but it’s now available from Amazon and other stores. The suggested retail price is $299, but the last time I checked, it was going for $211 at Amazon.

Piper plans to expand the platform in the coming year. In early 2019 the company will release a version with the same basic hardware, but with a clear acrylic case that lets you see what’s going on under the hood even when the PC is closed.

The company is also planning to launch a series of peripherals that you can purchase to extend the functionality of the basic kit, giving kids new projects to work on.