As expected, Lenovo is preparing to launch a new version of its Yoga Book. What’s a little surprising is that instead of a convertible laptop with a touchscreen display on top and a Wacom graphics tablet on the bottom, the Yoga Book 2 features dual displays: one on top, and one where you’d normally find the keyboard.

What’s also surprising is that the Yoga Book 2 isn’t the only dual screen laptop on display at Computex this week. Asus has one too… although the company says its Project Precog prototype is just a concept for now.

Lenovo revealed the Yoga Book Generation 2 during Intel’s Computex Keynote. While the announcement was a bit light on details, here’s what Lenovo says we can expect:

Since the original Yoga Book shipped with an Intel Atom Cherry Trail processor, it seems likely that the new model would upgrade to an upcoming Core Y-series chip.

Lenovo says you can use a virtual keyboard on the bottom display for typing with tactile, haptic feedback as you type. You can also use a pen to write on either screen. And when you don’t need keyboard or pen input, you can extend the display across both screens to use the Yoga Book like one big (and ultra-wide) tablet.

While the dual screen concept will probably make a device that’s more useful for the average person than the original Yoga Book with its graphics tablet, I do wonder how artists, designers, and other folks will react. The original was a niche device, but it seems to have generated some loyal fans.

I also wonder if typing on a virtual touchscreen display will be any more comfortable than typing on keys outlined on that Wacom pad.

Lenovo also teased a 3rd-gen model which is expected to ship in 2019. Instead of two distinct displays separated by a hinge, that version seems to have one big flexible display that can fold in half. Companies have been promising to deliver phones, tablets, and other gadgets with flexible OLED displays for years, but maybe 2019 will be the year they actually hit the streets… if they’re not delayed indefinitely again.

via Engadget, CNET, and TechPowerUp

This dual screen laptop is a convertible that works in laptop, tablet, or tent modes. But thanks to its dual screens you can also open it up and use the dual displays as a single wide screen. 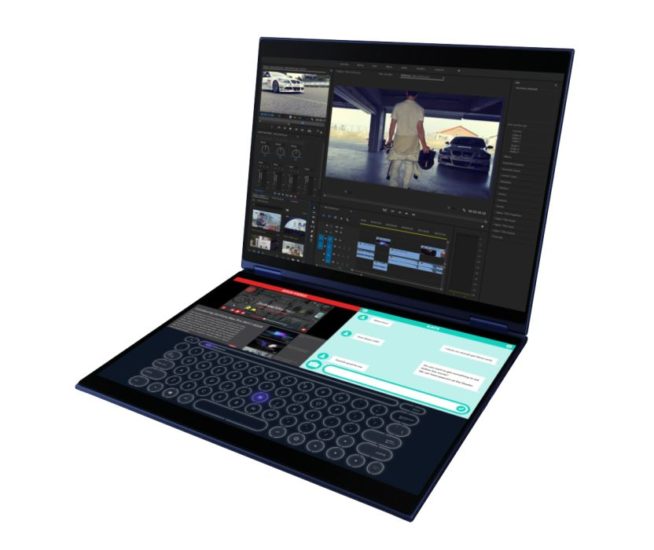 Asus isn’t providing many details about the prototype’s specs yet, but it’s said to feature AI technologies, including “Intelligent Touch” which recognizes the input type you’re using and changes the keyboard location to match your finger placement or switches to stylus mode when you’re using a pen.

This isn’t the first time we’ve seen dual-display devices. Last year ZTE released the Axon M smartphone with two displays and a hinge that allows you to fold the phone in half.

And way back in 2010, Toshiba released the Libretto W100 dual-screen laptop. 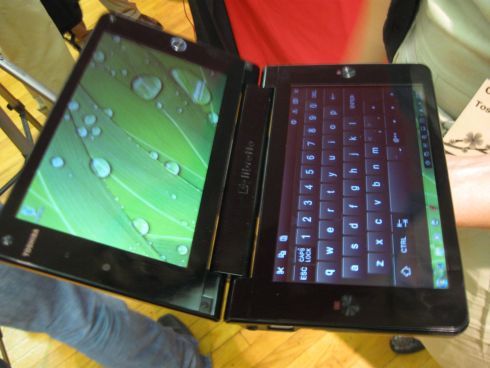 It shipped with Windows 7, featured an Intel Pentium U5400 processor, 2G of RAM, 62GB of storage, and dual 7 inch, 1024 x 600 pixel displays, one of which could be used as a virtual keyboard with haptic touch.

The Libretto W100 was arguably ahead of its time. Windows 7 wasn’t particularly touch friendly and enormous bezels and a large hinge made it look like you were holding two tablets rather than a single device with two screens designed to work together.

Toshiba discontinued the Libretto W100 after a single generation. But maybe enough things have changed to give these new dual-screen laptops a chance.

If you’re wondering why we’re seeing two dual screen computers unveiled now, maybe Intel has something to do with it.

The company has unveiled a new set of reference designs called Tiger Rapids. One is a dual-screen laptop with two glass displays… much like the Lenovo and Asus devices being shown off at Computex.

PC World reports that the other is a folding tablet with one full-color display on one side, and an electronic paper display on the other that you can use for jotting handwritten notes. The two screens are held together by a set of hinges that makes the concept device look a bit like a spiral-bound notebook.

The notebook version is said to have 7.9 inch displays, an Intel Kaby Lake processor, and solid state storage.

Both devices are intriguing… but I have to wonder if they’ll ever have more than the niche appeal that devices like the 1st-gen Yoga Book had.

For the right price, I can imagine these devices making excellent tablet replacements. But it’s hard for me to imagine swapping out a laptop with a physical keyboard for a just-as-expensive (if not more so) device with only virtual keys and finger and pen input.