Measuring just 6.8″ x 6.2″ x 2.9″, the HiGame is smaller than an Xbox One or PlayStation 4, but it’s a full-fledged desktop computer capable of handling virtual reality and/or multiple 4K displays.

It’s also the most expensive computer from Chinese device maker Huawei to date. The Chuwi HiGame is up for pre-order for $899 and up during an Indiegogo crowdfunding campaign. Prices are expected to go up when the computer starts shipping in August. 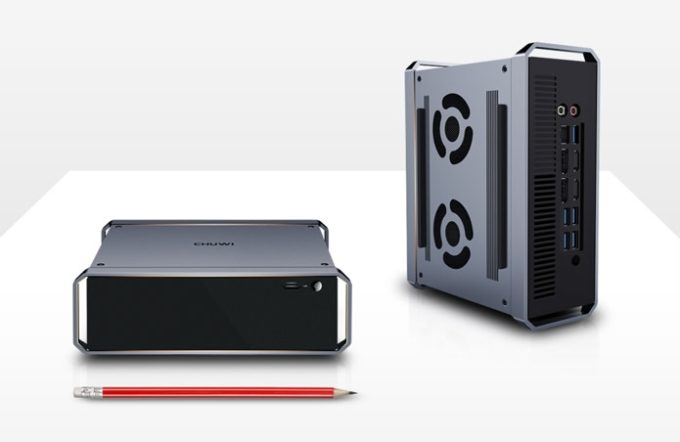 Chuwi is offering two versions of the HiGame:

The computer supports 802.11ac WiFi and Bluetooth 4.2 and comes with Windows 10 Home 64-bit software pre-installed. The whole thing weighs just under 2.9 pounds, making this a gaming PC that you can pick up and take with you.

While you won’t necessarily get the same kind of bleeding-edge performance from this system as you would from a high-end gaming desktop, the Chuwi HiGame should offer performance that’s on par with what you’d expect from a system with NVIDIA GeForce GTX 1050 or 1060 graphics, depending on which model you opt for… and on paper the system compares reasonably well with Intel’s Hades Canyon NUC.

Both models feature Kaby Lake-G processor with AMD Radeon graphics, but Intel sells the Hades Canyon NUC as a barebones kit for $799 and up, which means you’ll need to provide your own memory, storage, and operating system. That means the starting price of the HiGame is lower… at least during the crowdfunding campaign (unless you already have those items lying around).