Apple is getting ready to launch the next version of iOS, the operating system that powers its iPhones and iPads, and the company says iOS 12 will be available on every device that currently supports iOS 11. In other words, devices released as long ago as 2013 will support the latest version of iOS.

New features include performance improvements, updated augmented reality tools and apps, Siri improvements and new features, and a few iPhone apps are making their way to the iPad for the first time including Stocks and Voice Memos. Apple’s iBooks app has also been renamed Apple Books.

Apple says iOS 12 will be available as a free update this fall, and a developer beta launches today.

While some newer features may not make it to the oldest of those devices, Apple does have a much better track record than Android device makers at offering updates over a long period of time… and since Apple controls both the hardware and the software in its ecosystem, most iOS users are running the latest version of the operating system. 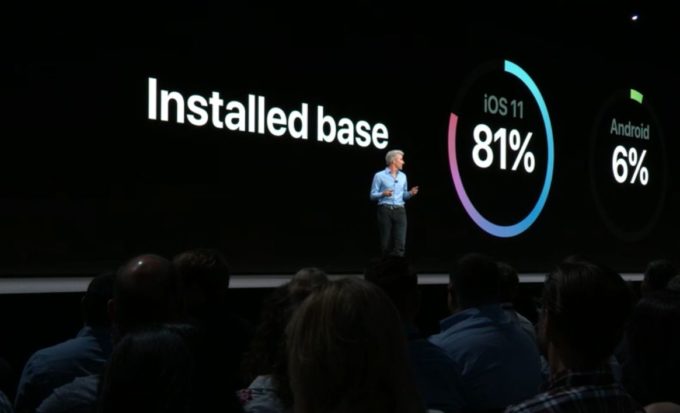 Apple says 81 percent of its users are running the latest software. Only 6 percent of Android users have the latest version of Google’s mobile OS… which is what happens when third-party device makers are generally in charge of deciding if and when to make the latest Google Android updates available to users.

The company says it’s also focused on optimizing the operating system for older hardware, with apps launching up to 40 percent faster on older devices, the keyboard working up to 50 percent faster, and a 70 percent speed bump in sliding up to take a photo. 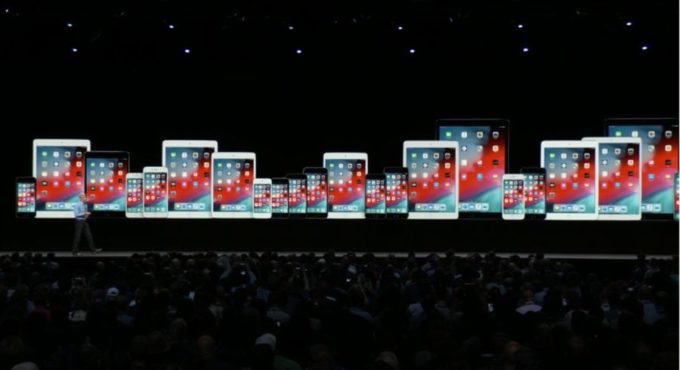 Like Google’s ARCore 1.2, that lets developers create multiplayer games and experiences that let each person play with virtual items on their own phone.

Apple showed off a virtual slingshot game on stage at WWDC today, while LEGO showed off an app that lets you detect a 3D object with a phone or iPad, then interact with a virtual version… and the game supports up to 4 players at once. 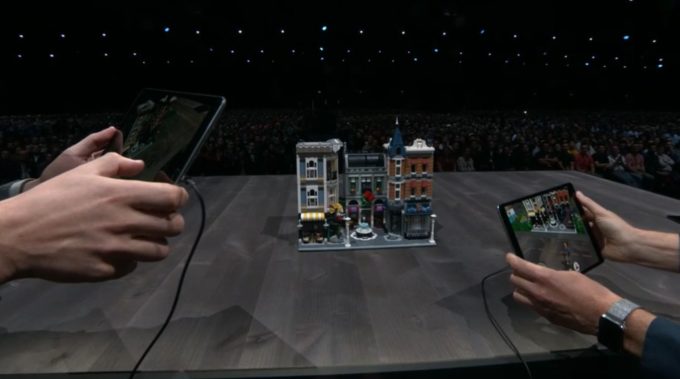 Apple is also adding a new first-party app to iOS 12 called “Measure,” that lets you measure sizes and distances using a mobile device. For example, you can measure the size of a box to calculate shipping or figure out how much gift wrap you need. Or you an scan a photograph to get dimensions so you know what size frame you need. 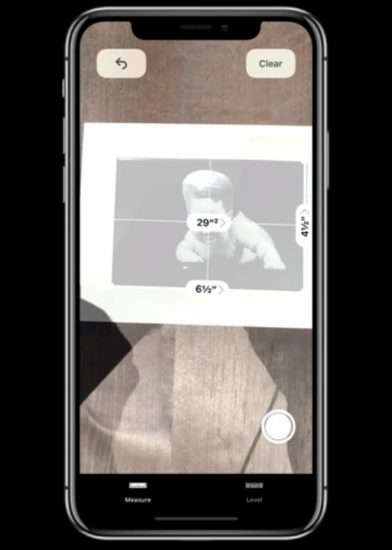 The updated Photos app includes improved search functionality including suggestions, support for multiple search terms, and the ability to search by locations or events.

Apple is introducing a Shortcuts feature for Siri that allows you to add custom phrases to Siri to bring up actions later.

Other examples Apple showed during a demo today include saying “I lost my Keys” to use the Tile app to locate your keys, or create a shortcut that lets you say “heading home” to trigger a bunch of actions, such as:

Siri will also offer suggested shortcuts based on your usage.

Apple is offering new tools to help you use your phone less when you don’t want the distraction. Among other things, there are new Do Not Disturb options including a bedtime mode that’ll keep alerts from filling your screen over night (so if you wake up and look at your phone you’ll feel less pressure to respond.

There’s also an option to set an automatic end time for Do Not Disturb so that when you leave a meeting you’ll start to get notifications again. 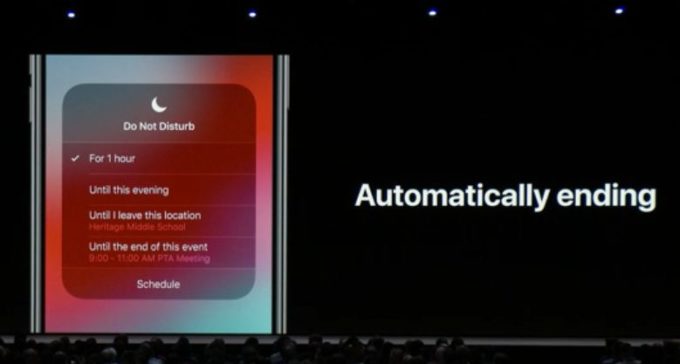 Finally there’s a new Screen Time feature that lets you see reports showing how much you’re using your phone. It breaks down specific app usage, how often you pick up your phone in an hour, and other information. And reports are broken down across multiple devices, so if you have an iPhone and an iPad both will be featured in the same report.

You can also set time limits on specific apps to get a reminder when it’s time to stop using an app.

Parents can also get reports about their kids’ usage or limit time used in specific apps… or limit kids’ to specific content you find appropriate.

Apple is now letting users created personalized Animoji, so that in addition to looking like a unicorn, T-Rex, tiger, koala, or ghost, you can create custom animated emoji cartoon characters that look like you.

There’s a creation tool that lets you select skin tone, hairstyle, accessories, and other features and then you can animate the character so it responds to your facial expressions using the iPhone’s front camera and sensors.

While it takes longer to create a “Memoji” than it does to scan your face with Samsung’s AR Emoji system, the results look cuter and less creepy.

You can also use MeMoji to snap rather odd photos using the camera in Messages: 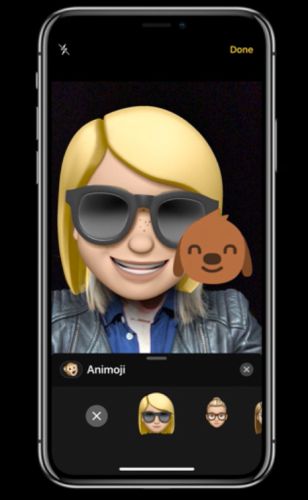 You can still use other characters, including a number of new options (like the aforementioned T-Rex, ghost, and koala), and there’s support for tongue detection in the latest version.

When you’re using Group FaceTime, you’ll see your own video center in a small icon in the bottom right corner, and other people will show up in tiled windows higher up on the screen. 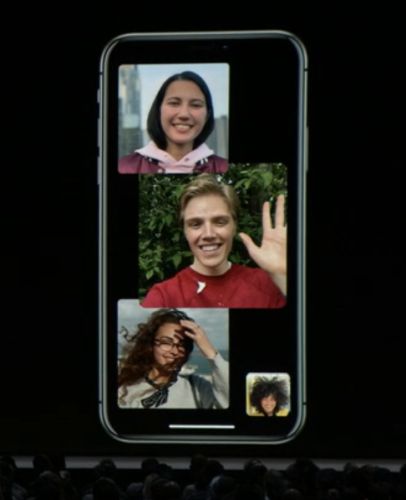 Each time someone talks, FaceTime will automatically enlarge their window so you know who you’re looking at, but you can manually enlarge any window as well.

Filters work, allowing you to use Animoji and other effects in group chats. And Group FaceTime supports iPhone, iPad, and Apple Watch (although the WatchOS version is voice-only).

Apple’s in-care experience is gaining support for third-party navigation, which means you’ll be able to use Google Maps, Waze or other apps for in-car directions.