Hardware hacker and bunnie huang’s latest project is an open source video board aimed at developers. It’s called the NeTV2 and it supports 1080p video at 60 Hz, features two HDMI ports, and is powered by an FPGA and 512MB of RAM.

The NeTV 2 board also includes PCIe 2.0 x4 connectors, allowing it to be used with a computer to offload work to an external GPU, and it aso has a JTAG/UART header that allows it to be plugged into a Raspberry Pi.

It’s an incredibly versatile little video machine that could theoretically be used to provide an overlay to existing video sources. For example, you could use it to add subtitles to movie streams, translate on-screen text in real-time, or block ads.

But right now some of those capabilities are limited… because of US law. Huang is launching a crowdfunding project for the NeTV2 in part to aid a lawsuit against the US government to remove some of those restrictions. The idea is to show that there’s demand for devices that are capable of providing innovative new features that are currently restricted by law in the United States. 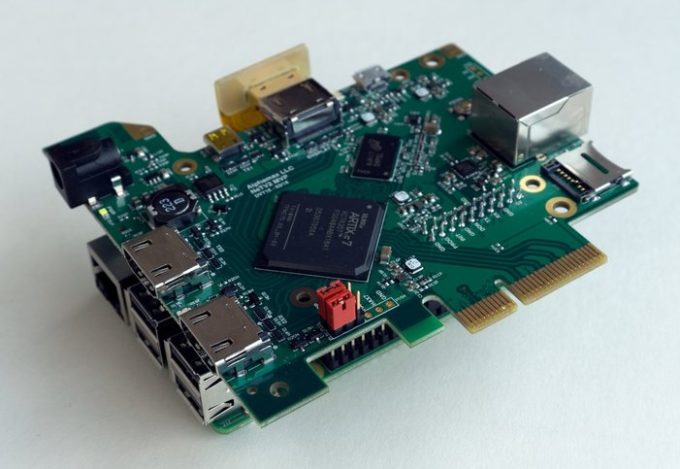 His argument is that there are things bypassing encryption can let you do beside pirating movies and TV shows.

Huang, along with Johns Hopkins University researcher Mathew Green and the Electronic Frontier Foundation filed a lawsuit against the US Justice Department in 2016, but one of the arguments that’s been made against the group is that “no other users have specified how they are adversely affected by HDCP in their ability to make specific noninfringing use of protected content.”

So Huang developed the NeTV 2 board, which currently offers two modes: a “classic” mode which allows you to do certain things (such as adding an opaque text overlay to live video streams) without decoding/decrypting the video and a “libre” mode which offers more functionality, including the ability to alter pixels in real-time to do things like replace text on the display.

For now, Libre mode only works with unencrypted video streams. But if the lawsuit is successful, you could theoretically use the NeTV2 or a similar device to bypass encryption and use these sorts of features with videos streamed by providers like Netflix, Hulu, Amazon, or your cable, fiber, or satellite provider.

There’s no guarantee that’ll ever happen, so the best reasons to buy the NeTV2 right now is because you’re satisfied with what it can do today… and you want to help huang demonstrate that there’s demand for this sort of product.

Prices start at $200 for an NeTV2 board, which is up for pre-order through a crowdfunding campaign at Crowd Supply. A pledge of $320 gets you a Quick Start bundle that includes the development board, a Raspberry Pi 3 B+, an 8GB solid state drive, and cables.

Neither model is expected to ship until May, 2019.