HP is expanding its line of AMD Ryzen-powered laptops with a new set of convertibles set to hit the streets this month.

The HP Envy x360 15 is a 15.6 inch touchscreen laptop with a 360-degree hinge and a choice of AMD Ryzen or Intel Kaby Lake Refresh processor options, with prices starting at $750 and $870 respectively.

Meanwhile, the new HP Envy x360 13 is a smaller model that’s only available with Ryzen Mobile chips. Prices start at $760 for a model with a Ryzen 5 2500U quad-core processor. The convertible laptop measures about 0.6 inches thick, weighs about 2.9 pounds, and features integrated AMD Radeon Vega graphics. 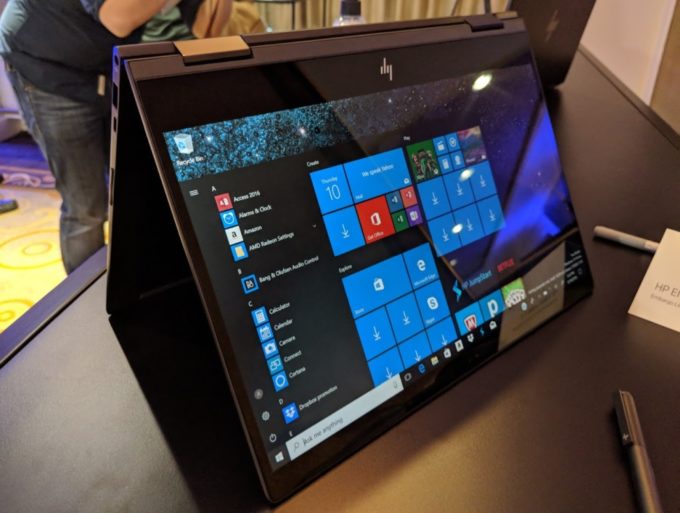 As part of HP’s 2018 Envy line of premium notebooks, the Envy x360 13 supports both finger and active pen input, has an edge-to-edge display with slim side bezels, and it has a few fancy design elements, including a geometric pattern in the speaker grill (which is located above the keyboard), and a “Damascus steel pattern” etched into the back edge of the computer (although it can be a bit hard to make out on the black metal chassis.

The HP Envy x360 13 will be available in at least two configurations:

The notebook has a backlit keyboard, a USB 3.1 Type-C port, two USB 3.1 Type-A ports, an SD card slot, and power and volume buttons on the side of the computer.

HP also borrowed a feature from its Elite line of business laptops, bringing its Sure View technology to the Envy x360 13. The laptop normally has 178 degree viewing angles, but press a button and it’s difficult to get a good look at the screen unless you’re directly in front of it, making it tough for someone to spy on your screen when they’re sitting right next to you on a bus or airplane.

HP’s 15 inch model has similar specs (the Ryzen models, anyway), but weigh 4.5 pounds and measure about 0.74 inches thick. The large model also has an HDMI 2.0 port.