Google is set to launch the next major version of Android in the third quarter of 2018. Code-named Android P (for now), the update is expected to bring more notification changes, native support for phones with dual cameras and/or notches in the display, and much more.

One new feature Google hasn’t publicly disclosed is a change in the way recent apps/multitasking works. But according to 9to5Google, the Android Recents user interface is getting a major overhaul. 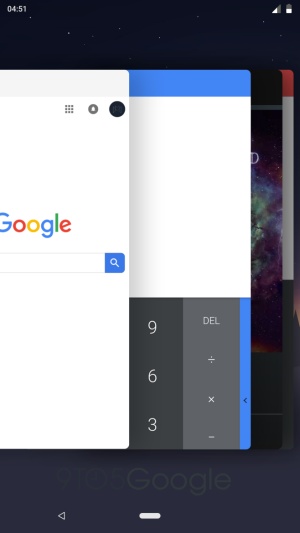 First up, it looks like Google is going to show recent apps as a group of horizontal cards you can swipe through, rather than the current vertical stack. This should give you a bigger preview of recently used applications, but otherwise the menu will work pretty much the same: you can swipe between cards to switch tasks or swipe up to remove an app from the list of recents.

Second, and more surprisingly, it looks like Google is getting rid of the dedicated Recents button.

Instead, users will be able to launch the recent apps menu by swiping up on the new home button (which 9to5Google describes as a “pill icon”).

That means you just get two buttons: home and back. It looks a little off balance, to my eyes, since the home button is still in the center and the back button to the left. But the recents button reportedly goes away altogether when you’re at the home screen, which means the only button you’ll see is the new home/pill/recents button at the bottom of the screen.

It’s possible that this could be a first step toward Google eventually doing away with on-screen buttons altogether. The first Android phones had physical buttons below the screen. Eventually Google added virtual buttons to Android’s user interface, allowing phone makers to do away with the physical buttons, making it easier to use a phone or tablet when it’s in portrait, landscape, or any other mode (like when it’s rotated 180 degrees so the USB port is on the top instead of the bottom).

A move toward gesture-based navigation could be the next step, and one that would seem well-suited for the current moment, when a growing number of phone makers are releasing phones with slim bezels. If you don’t have much bezel to hold onto, you might accidentally hit an on-screen button just by holding your phone in your fingers. But if you need to make a specific gesture instead of just tapping a part of the display, it’s less likely that you’ll open the recent apps menu by accident.

That said, it looks like the home and back buttons aren’t going anywhere yet. So maybe Google has some other reason for eliminating the Recents key.

Or maybe this is just an experimental user interface that 9to5Google stumbled upon… and it’s one that may or may not end up in the final version of Android P that ships later this year.