Leap Motion’s hand-tracking technology that lets you control a PC using hand gestures hasn’t really caught on since it first launched almost 5 years ago. But the company’s still around, and now Leap Motion is unveiling something that could be revolutionary… or it could just be another cool idea that fails to catch on.

The company designed an augmented reality headset, code-named Project North Star, that not only includes sensors for tracking your hand motion, but transparent displays that can show you virtual objects that you can interact with.

In other words, you can use your real hands to pick up and manipulate virtual objects. And that’s just the tip of the iceberg. Leap Motion may be showing a completely new way to interact with computers, and one that doesn’t require learning to type or memorize a complex set of button presses for playing games or using apps.

The company doesn’t plan to sell the headset, but it’ll make the hardware and software open source starting next week in the hopes that someone else will build and sell the headsets, which the company says could cost less than $100 to produce (at scale, suggesting you’ll need to make a lot of units to hit that price).

Most existing virtual reality and augmented reality handsets use handheld controllers for input, but with a Leap Motion sensor you don’t need to hold anything in your hands at all. If you want to pick up a ball, you just pick it up instead of pushing buttons. That could make it easier to learn to use a North Star-like system than a typical PC.

And while there aren’t a lot of augmented reality headsets on the market, the most high profile one is Microsoft’s HoloLens, which has just a 70 degree field of view.

While the hardware is intriguing, it’s North Star’s software that’s really unusual here. Instead of just relying on unnatural hand gestures for input, North Star lets you assign different functions to your hands and then just use them naturally. For example, Fast Company explains that if you want to paint you can turn your fingers into paintbrushes while switching colors by looking at a virtual palette on your wrist. 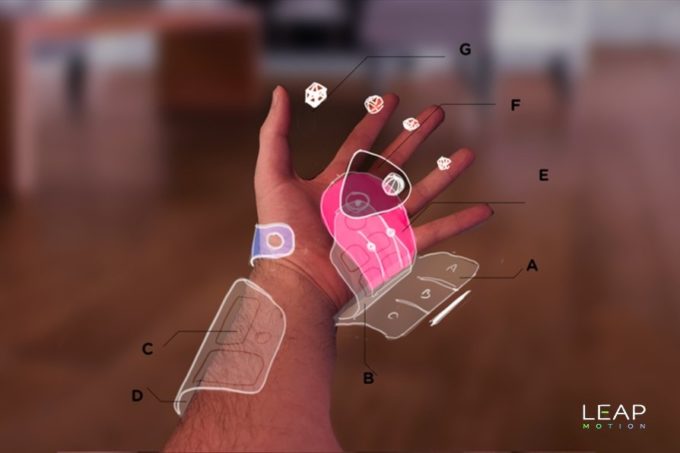 Or you could put on “virtual wearables.” That could be something as basic as a fake wristwatch that shows the time or as complex as a menu system that you pull out from a card on your wrist.

Whether any of this really takes off depends on a few things. First, while there’s clearly a lot of investment in VR and AR technology these days, it remains to be seen if this is really the future of everyday computing or a niche application that will only be used for specific niche applications. Second, even if AR is the next big thing (or at least one of the next big things), it’s unclear how much room there is for competing platforms.

That said, if a company actually brings Leap Motion’s $100 headset to market (it’ll probably be priced a bit higher if that’s the production cost), it’d look mighty good next to Microsoft’s Hololens, which currently sells for $3,000 and is still aimed at developers.

Sure, Leap Motion’s Project North Star is more of an input and display device for a separate computer, whereas a HoloLens is a complete PC that you wear on your head. But that’s a pretty big price difference, even once you factor in the cost of a PC to use with a North Star headset.