One is called Advanced Platform Telemetry, and it incorporates machine learning to better identify potential security issues. The other is called Accelerated Memory Scanning, and it tapes Intel’s GPUs to enable more efficient scans for memory-based attacks. 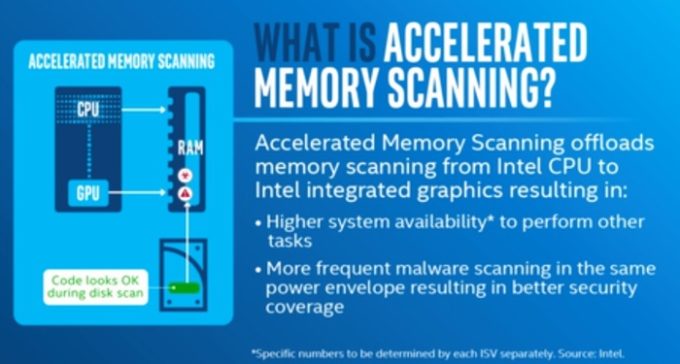 According to Intel, CPU utilization drops from around 20 percent to as little as 2 percent when using the new GPU-accelerated scanning technique.

But Accelerated Memory Scanning can be built into other anti-virus software, so it may just be a matter of time before it shows up in other security software that is available for anyone to use.

The company is also announcing Intel Security Essentials, which basically brings together a bunch of different Intel security features under one brand. (and one with a rather familiar name).

After major security vulnerabilities affecting chips from Intel and other companies were unveiled earlier this year, it’s not surprising to see that Intel is working to beef up security for devices using its processors. And it sounds like this may just be the start.

One reply on “Intel leverages GPU for security scanning”