For the first time Intel is offering 6-core, 12-thread chips for laptops. And for the first time the company will use the Intel Core i9 name for some of its highest-performance mobile chips. 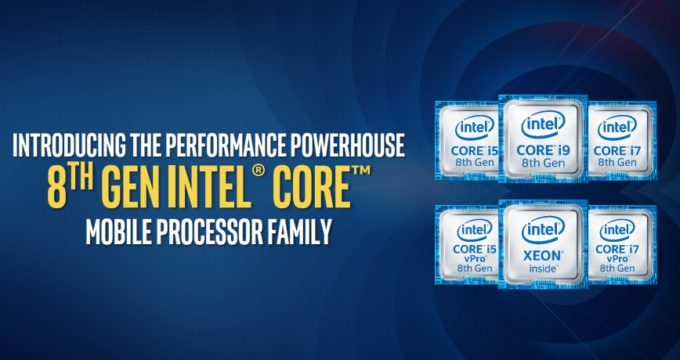 As the name suggests, the new chips are based on the same 14nm++ architecture as Intel’s Coffee Lake chips for desktops. These 45 watt processors offer more performance and consume more power than the 15 watt, quad-core Kaby Lake Refresh chips Intel launched last year. But the company says despite their differences, both are part of its 8th-gen Core processor lineup. Go figure.

Some chips also include a new Intel Thermal Velocity Boost (TVB) feature which automatically bumps up the CPU boost clock speed under the right circumstances.

For example, the top-of-the-line Intel Core i9-8950HK chip is a 6 core, 12-thread processor with a base clock speed of 2.9 GHz and turbo boost speeds that would normally top out at 4.6 GHz, but which Intel says can go up by as much as another 200 MHz “if the processor temperature is low enough and turbo power budget is available.”

The Core i9-8950HK is also fully unlocked, allowing users to overclock the CPU. Most of the other Coffee Lake-H chips are not.

Here’s a run-down of the first Coffee Lake-H chips expected to ship:

All of the new chips support dual-channel DDR4-2666 memory and optional Intel Optane memory. The Xeon chips (and the Core i5-8400H) are also Intel vPro eligible.

Speaking of Optane memory, Intel is also pushing its 3D Xpoint storage solution for both mobile and desktop users. The company is introducing a new Data Drive Acceleration feature that it says will let you pair a relatively small Intel Optane drive with a larger secondary hard drive to speed up load times for media, games, and other large files.

The company will also start issuing Core i5+, Core i7+, and Core i9+ badges for use on some computers that come with Intel Core chips and Intel Optane memory.

PC makers are already starting to introduce notebooks powered by the new chips, including general-purpose systems like the new Dell XPS, and an awful lot of gaming laptops, including: