PC makers have been shipping laptops with touchscreen displays for years, but Apple has yet to follow suit, basically arguing that touch panels are for phones and tablets, not laptops. That may change if and when Apple eventually brings support for iOS apps to its Mac lineup. But for now the best you can do is hack touch functionality onto a Mac.

One way to do that is buy purchasing a third-party gadget like the $99 AirBar, or you can save $98 and just build your own.

The Project Sistine method lets you add (very rudimentary) touch functionality to a MacBook with just about $1 worth of hardware. 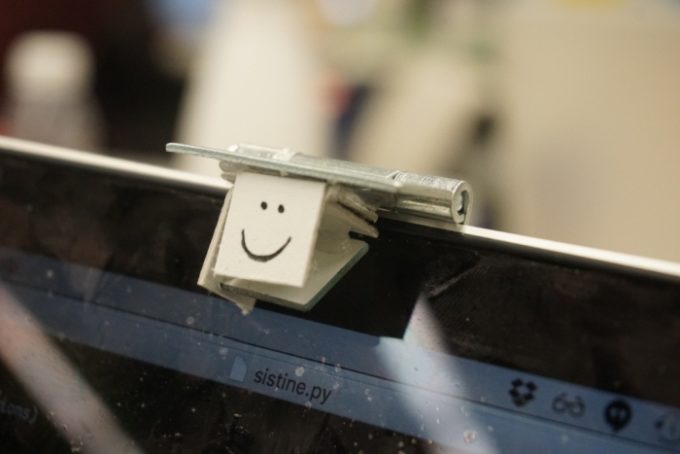 Here’s the basic idea: set up a mirror in front of the laptop’s IR camera so that instead of looking straight ahead, it looks down at the screen where it will see your fingers when you reach up to touch the screen.

Software running on the Mac interprets your taps and motions as input… and can tell the difference between a finger hovering over the display and one that’s touching the screen by looking to see when your fingertip is in contact with its reflection on the glossy display.

The touch detection isn’t quite as quick or as accurate as some other solutions. But it’s not bad for a project that came together in just 16 hours and which just uses about $1 in parts that you can find at a hardware store and/or drug store, including:

The door hinge and paper plate create a frame that you can place atop a laptop. The glue holds the mirror in place. And the mirror tricks the camera into looking down.

As for the software, a tool called ShinyTouch does the trick of using a 2D camera to capture 3D touch input.

via Gizmodo and Hackaday