There are plenty of popular applications that are available across multiple platforms: Microsoft Office runs on Windows, Mac, Android, and iOS. And the open source LibreOffice runs on Linux, Mac, and Windows,

But it’s generally up to the developers of those apps to decide what platforms they’ll support… because it takes work to compile software to run on different operating systems.

The folks at Droplet Computing want to change that. They’ve introduced a new container solution called “Droplet Universal” that basically lets any app run on any operating system. Not only could you theoretically run MS Excel on your phone: you could run the full desktop version instead of the stripped-down mobile version. 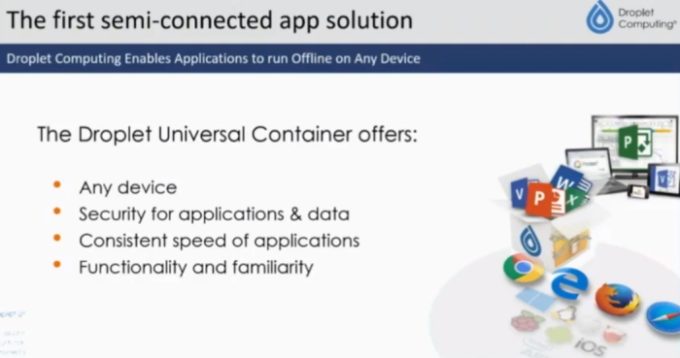 At least, that’s the idea. Right now Droplet is targeting enterprise customers rather than end users.

The solution could allow businesses that are relying on software designed for an old version of Windows to upgrade to a newer version without losing the ability to run that core application, for instance. Or that same business could start using Macs or even Chromebooks. 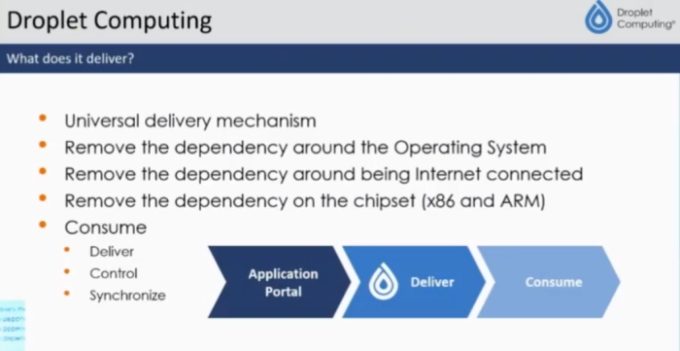 Droplet isn’t using emulation or virtual machines to do this. Instead apps are basically compiled using WebAssembly and placed in a container with everything you need to run a specific application. Then you run the resulting app in a web browser.

You don’t need an internet connection for the app to work, and Droplet says the apps look just like the normal version of an application, no matter what device, operating system, or web browser you’re using.

Theoretically containers would allow an app to run on any operating system and any architecture, although Droplet says that there’s “not yet” support for running apps compiled for ARM chips on a device with an x86 processor.

It is interesting to note that Droplet relies on the open source WINE project for loading x86 Windows applications. WINE is a compatibility layer that makes it possible to run some Windows apps on Linux machines.

WINE recently added support for running Windows applications on Chromebooks and Android devices with x86 processors… technology it picked up from CodeWeavers’ Crossover product. Droplet is partnering with CodeWeavers.

Eventually Droplet’s technology could lead to a world where developers create an app once and it runs across a wide range of platforms… or where customers can repackage apps to run on platforms that aren’t officially supported.

But it remains to be seen how widely it will be adopted, or what kind of features will be included in the Droplet Computing Personal Edition platform.

Droplet unveiled the new platform at Cloud Field Today, and you can check out the 2-hour video of the presentation at Facebook.

via Chrome Unboxed and About Chromebooks

5 replies on “Droplet Computing uncouples apps from the OS (So Windows apps run on Chrome OS or Android, for example)”