How do you make a phone with slim borders around the display, but still leave room for the earpiece, camera, and ambient light sensor?

Apple, Essential, and a bunch of other companies have opted for display cut-outs, which has the screen wrap around the camera and sensor. Samsung and Google have just opted to make the top and bottom bezels slimmer, but still leave them generally in place. And Chinese phone maker Vivo has the craziest solution we’ve seen so far, with a slim-bezeled phone that has a pop-up camera.

But Chinese phone maker Doogee has another idea: a phone with a display that slides down to reveal the camera, earpiece, and other components. 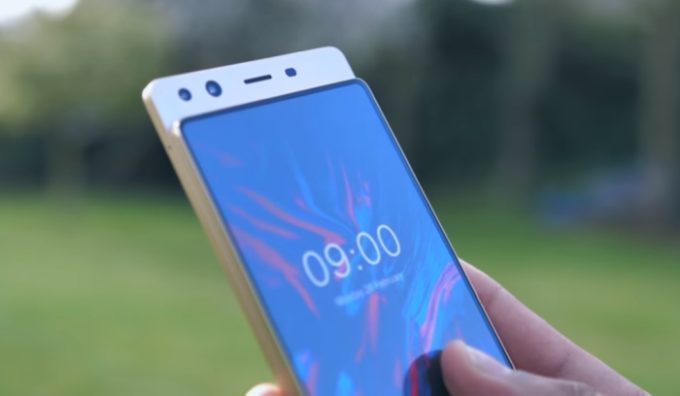 The Doogee Mix 4 isn’t available for purchase yet, and it’s not even really a working phone yet. But YouTuber Mrwhosetheboss got his hands on a prototype that shows off the design, and it looks like an interesting solution.

Basically the phone has a 5.99 inch AMOLED display with virtually no bezels around the top, bottom, or sides. That’s because most of the phone’s electronic components are packed into the back of the device.

In order to reveal the camera, earpiece, and sensors you slide the display downward. It’s possible that Doogee could offer software that allows this motion to automatically open the camera app, answer a phone call, or open the phone dialer. But since we’re just looking at a design prototype, it’s unclear how the final software will work.

The picture Doogee slapped on the front of the phone does show a fingerprint icon though, suggesting that the final product could have an in-display fingerprint sensor.

There are dual cameras on the back of the phone, and volume and power buttons on the side. The Doogee Mix 4 is about 11mm thick, which makes it a bit chunky by modern smartphone standards, but still easily pocketable, especially when you consider that the slim bezels make this one of the smallest 6 inch phones you’re likely to see.

We’ve seen phones with sliding parts in the past, but usually the idea is to hide a keyboard when it’s not in use. This is the first time I’ve seen a phone with a sliding display designed to hide the camera.

Mrwhosetheboss says he expected the Doogee Mix 4 to go on sale toward the end of 2018… about 6 months after the company releases the Mix 3, which it hasn’t done yet. He also says it’s expected to feature an unspecified Qualcomm Snapdragon processor and sell for around $300, suggesting that despite the unusual design, this phone could ship with mid-range specs.

Doogee typically focuses on the budget smartphone space, but this wouldn’t be the first time the company was a bit ahead of the curve. In 2015 the company was one of the first to launch a phone with both 4GB of RAM and a 2560 x 1440 pixel display.