Samsung’s been working for years on a folding phone with a flexible display that can fold in half, letting you use a single mobile device as either a phone or a tablet. But it’s not clear if or when that device will make it to market.

It looks like the company may not be putting all its eggs in one basket though: the folks at Patently Mobile noticed that Samsung has also filed a for a patent on a different type of phone/tablet hybrid.

Instead of a display that folds in half, this model has a rollable display hat slides our when you pull rom the sides, giving you more screen space when you need it. 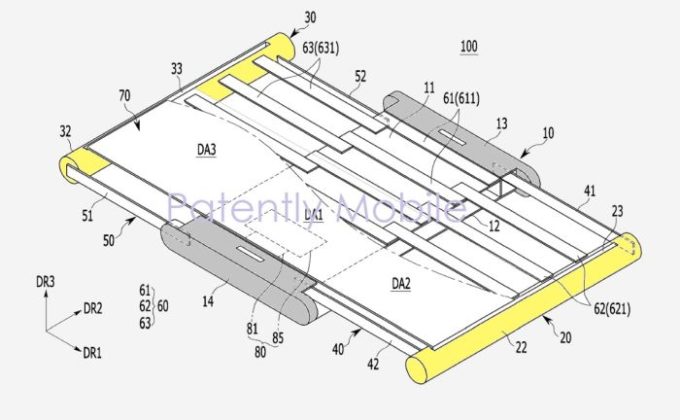 Flexible displays are already pretty common. They’re used in phones with curved displays like Samsung’s recent Galaxy S and Galaxy Note models… but while the screens are flexible, the phones themselves are rigid. Designing a phone that actually folds around the display presents some pretty big challenges which could be sidestepped by a phone with a rollable display that slides out (you don’t need the batter or case to fold, for example).

That said, Samsung’s been working on its folding phone for a long time and I suspect the company isn’t ready to give up on the idea anytime soon.

Just because the company applied for a patent on a rollable design doesn’t mean Samsung will bring a phone with this type of expandable display to market. But it is an interesting idea.

Note: This article has been updated to reflect the fact that patent seems to show a screen that rolls up rather than a devoice with three separate displays, where two slide out from behind the second screen).