With a few notable exceptions, such as the Samsung Galaxy S9, it looks like most of this year’s flagship smartphones are going to feature notches: the display cut-out that wraps around a camera at the top of a phone.

While there are some good reasons for this sort of design choice, it’s not everyone’s cup of tea.

Fortunately some phone makers seem to realize that: the new Huawei P20 series phones have an option to hide the notch by surrounding it with black bars to make the top of the screen look like someone didn’t take a bite out of it. But if you have a phone that doesn’t have this software feature baked in, there’s a free third-party app that could do the trick. 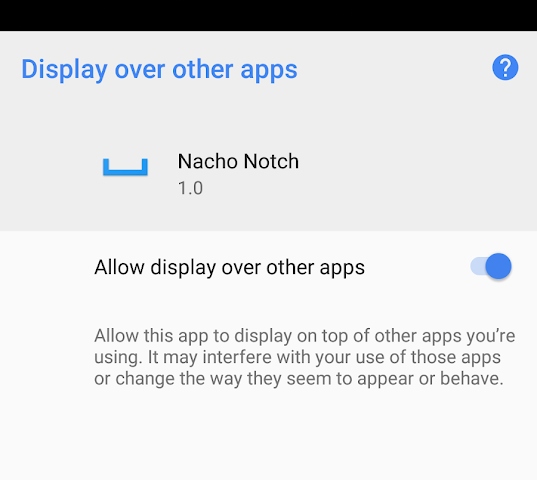 It’s called Nacho Notch – the Notch Hider. It’s a silly (and too-long) name, but the idea is pretty similar to what you get with the Huawei P20. Enable the app and it will draw a black bar that overlays the status bar.

Your notifications will still appear at the top of the screen, but they’ll be in a bar that’s about the same color as the notch, which should make things look a bit less jarring.

Once installed you can add a Show Notch/Hide Notch toggle to your Quick Settings panel to enable or disable the app. It won’t show up in your app drawer and there isn’t much of a GUI.

Nacho Notch also works on phones that don’t have notches: it’ll keep your status bar from changing color, I suppose. But there’s really not that much reason to use it unless you have a notch that you want to hide.

For no the app only works in portrait mode, which is disappointing since I think display cut-outs look strangest when viewing videos, games, or other content in landscape mode. But that’s something phone makers like OnePlus say they’re planning to solve with their own paint-the-bar-black solutions.