Intel launched its Gemini Lake line of low-power Celeron and Pentium processors late last year, but so far most of the Gemini Lake-powered computers we’ve seen have been desktops rather than notebooks, tablets or convertibles.

Now there’s at least one convertible notebook with a Gemini Lake processor that you can actually buy.

The Jumper EZBook X1 is an 11.6 inch laptop with a full HD touchscreen display, a 360 degree hinge, a 6 watt Intel Celeron N4100 quad-core processor. It’s up for order from AliExpress for around $425 and up. 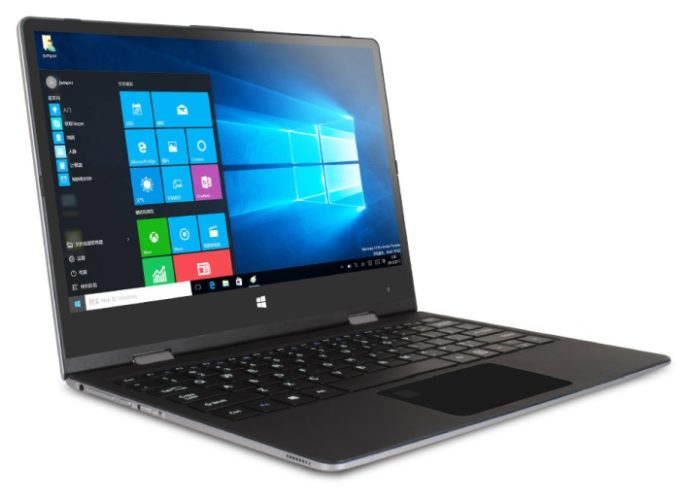 Intel’s Gemini Lake processors should offer a modest boost in CPU and graphics performance over their Apollo Lake predecessors plus a few new features including support for “Local Adaptive Contrast Enhancement” technology which is designed to balance display brightness and battery life so that you can see a laptop display easily outside, but get up to 10 hours of video playback time from a 35Wh battery (presumably when indoors).

The EZBook X1 is a bit more expensive than a typical Apollo Lake convertible, but that’s not entirely surprising given that it’s one of the first devices on the market with a new chip, and its spec sheet looks reasonably decent.

In addition to a quad-core processor with Intel UHD 600 graphics, the system has:

The notebook also appears to have slim top and side bezels, and if I’m not mistaken, it looks like the webcam is below the screen.

If you’d rather not buy computers from AliExpress, the EZBook X1 probably won’t be the only Gemini Lake convertible for long. Lenovo will probably release a Yoga 330 convertible laptop with an Intel Pentium Silver Gemini Lake processors soon.