Google is expanding its Instant Apps feature to games, allowing you to tap a “try now” button in the Google Play Store to test some Android games without first downloading and installing them.

It’s called Google Play Instant, and there are a half dozen games that support the feature at launch. You can find them by checking out the Instant Games collection in the Play Store. 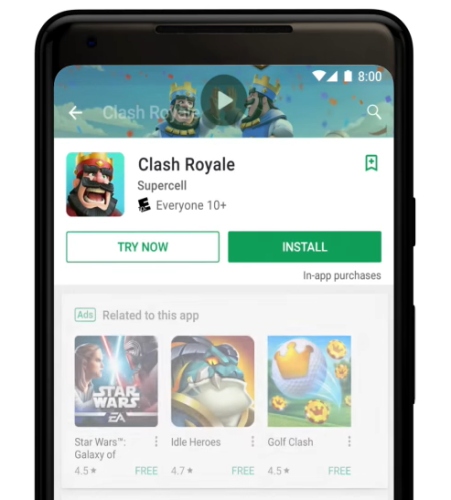 You still need to download some data to your phone or tablet when trying an Instant game. But you can get started more quickly because Google Play Instant supports progressive downloads, allowing you to start playing without downloading and installing all of the game’s data.

The idea is to let users start playing a game quickly before deciding whether it’s worth the time (and storage space) to actually save and install it.

Google Play Instant is in closed beta, which means Google is only working with a select group of developers for now. But the company plans to make it available to more developers in the future, and anyone can sign up to be notified when more information is available.