The next major version of Google Android is coming later this year, but developers and early adopters will be able to get an early look starting today.

Google is releasing the first developer preview of Google Android P and, among other things, it adds native support for phones with camera cut-outs in the screen (notches), better support for phones with multiple cameras on the front or back, notification improvements, and an indoor positioning feature that could make navigating shopping malls, convention centers, and other indoor mazes a bit easier.

According to Google’s current timeline, there will be five developer previews with a final release of Android P slated for sometime in Q3, 2018 (probably in August or September). 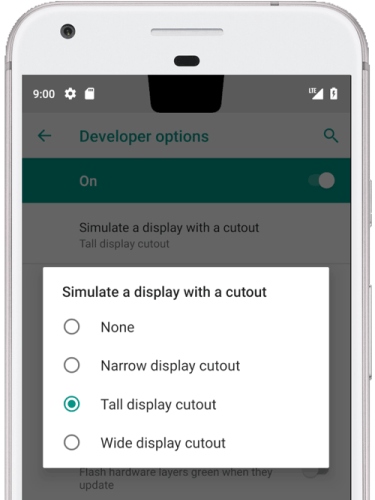 Before you run off to see if you can get in on the first developer preview, there are a few things to keep in mind:

Among other things, installing Android P DP1 could result in system slowdowns, reduced battery life, and problems running some apps. So proceed with caution (or install it on a secondary device… or just try running Google’s emulator image on a PC).

Here are some of the new features coming in Android P:

With a growing number of phone makers releasing devices with edge-to-edge screens that have camera cut-outs, Google is adding a new DisplayCutout class for developers to ensure their apps wrap around the notch instead of trying to display content that would not be visible.

App developers can also go to the developer options on an Android P phone, scroll down to the Drawing section, and choose an option to simulate a display with a cutout and select the size of the cutout to see how their apps would look on a phone like the Essential PH-1. 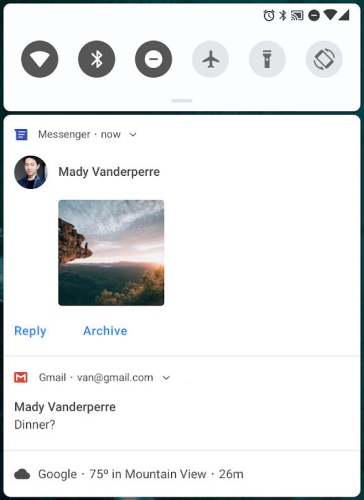 There are also new notification channel features including the ability to block entire groups of channels.

Android P includes native support for accessing streams from two or more physical cameras at the same time. This enables features such as:

Google is adding support for the 802.11mc WiFi protocol (WiFi round-trip-time or RTT) that can measure the distance between your device and a WiFi access point.

In a nutshell, this offers more precise location tracking when you’re indoors and cellular network and/or GPS data might not be as reliable.

The feature is designed to work when your device can measure the distance to 3 or more access points, allowing your mobile device to triangulate your position. Among other things, this could allow for indoor navigation or location-based controls that could do things like use your phone to automatically turn on smart home gadgets like lights, speakers, or thermostats when you move from room to room.

Android P will have a more uniform and consistent user interface for fingerprint authentication, including a new standard system dialog that will show up when you’re prompted to touch your finger to the sensor.

As expected, Android will also restrict apps that are running in the background from accessing your device’s mic, camera, and sensors.

And Android backups will feature client-side encryption, which means you’ll need to enter a PIN, pattern, or password in order to restore data backed up from your device. That feature isn’t available in developer preview 1, but it’ll make its way to a future release.

You can find more details at the Android P Preview site and the Android Developers blog, but keep in mind that this release is target at app developers, so there may be features that aren’t highlighted. Google may also add (or remove) features before Android P is released to the public later this year.