Google and a host of other major players in the online advertising business have started working toward “better ads.” You won’t find Mozilla on the membership list of the Coalition for Better Ads, but that doesn’t mean they aren’t concerned with advertising annoyances. 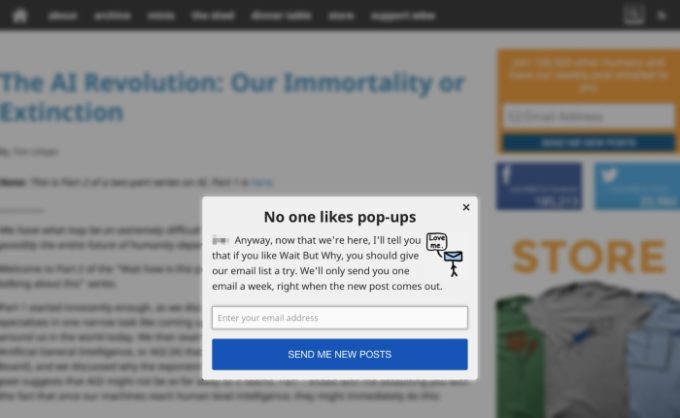 One particular problem they’re looking to tackle is in-page popups, like the one shown here. They might not be quite as bothersome as ads with autoplaying audio or video, but they’re still an unanticipated disruption when you click through to a website.

Mozilla’s plan — at least for now — is to have Firefox detect these ads and dismiss them automatically. All but the most insidious let you click an X (or skip, continue to site, etc.) to close them. If Firefox can be trained to sniff out the offending elements in a page’s code, it could also whisk them away without requiring user intervention.

That’s where Firefox users come in. Mozilla is building a database of offending sites, and anyone who encounters one can quickly fill out a short Google Form to let them know about it. The goal is not to compile a massive blocklist to counter invasive ads like some annoyance-busters do. Mozilla doesn’t want to force its users to rely on a centralized list.

Instead, they need real-world examples so they can test the new feature as it’s being developed. If Mozilla is happy with the results, then you just might see Firefox’s built-in popup blocker tackle these in-page elements in the near future. Mozilla’s Ehsan Akhgari says they’d love to see the feature delivered to both desktop and mobile versions of Firefox.