Linux-based operating systems like Ubuntu and Debian may be standalone operating systems. But thanks to an optional Windows 10 feature called Windows Subsystem for Linux, it’s been possible to install them and run them from within a Windows environment without rebooting and without installing a virtual machine.

Out of the box, all you get is a command-line interface. But that still makes the ability to run Linux pretty handy for the audience Microsoft is targeting: developers and power users that prefer a Bash terminal and GNU/Linux tools to Windows command line tools.

Installing a GNU/Linux distribution like Ubuntu got a lot easier when Microsoft started adding them to the Microsoft Store, starting with Ubuntu, OpenSUSE and SUSE Enterprise Linux.

This week Kali Linux joined those operating systems in the Microsoft Store. And today Debian Linux made its debut. 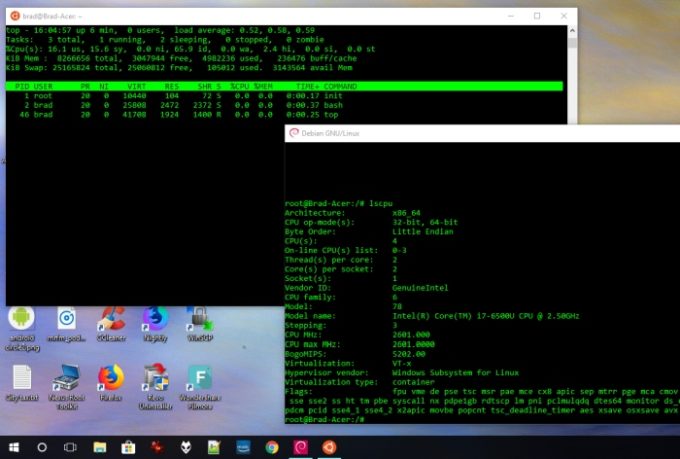 Debian is one of the most popular GNU/Linux distributions and it has a reputation for stability. Ubuntu is actually based on Debian, so if you’re familiar with Ubuntu commands, you should be able to comfortable navigate a Debian terminal.

It’s a free and open source operating system, and while you would usually run it with a desktop environment such as GNOME or KDE, the version available in the Windows Store is command line-only, just like all other Linux distros available for the Windows Subsystem for Linux (although some folks have found ways to enable a display server for a graphical user interface and Linux apps that have a GUI).

And one of the fun things about the Windows Subsystem for Linux is that it allows you to install and run multiple Linux distros simultaneously. The screenshot above shows Ubuntu and Debian running in separate windows on my Windows 10 PC.

Here are all the GNU/Linux distros available from the Microsoft Store so far (as of March 6th, 2018):

11 replies on “Debian Linux is now available in the Microsoft Store, runs on Windows 10”