Most of the companies working on augmented reality today are focused on the same thing: video. The idea is to use your phone’s display, smart glasses, or other devices to superimpose virtual items on your real-world environment visually.

Bose has an idea that sounds different, because it focuses on… sound.

The company is introducing its Bose AR platform at SXSW this week, along with a prototype set of glasses. But the company says its technology could be built into headphones, helmets, or other wearable devices. 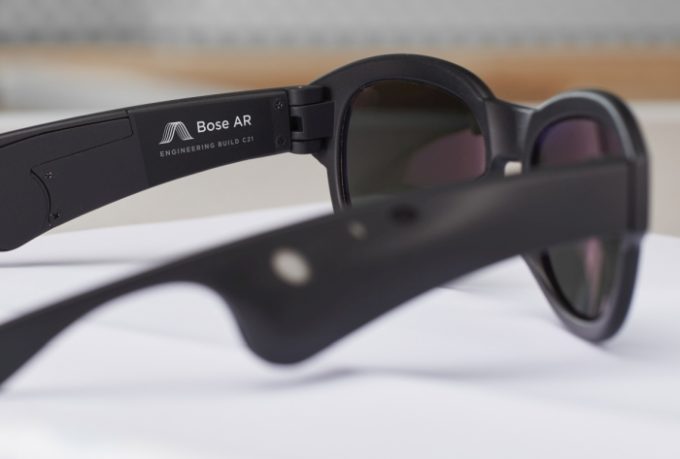 So the first thing that makes Bose AR different from Google Glass, Microsoft Hololens, or Apple’s ARKit and Google’s ARCore is that there’s no visual component.

Bose AR might sound like a fancy name for the same sort of thing you can already do with Google Assistant, Siri, or Cortana, but it’s also location and direction-aware. The system uses sensor to track head movements so it knows what direction you’re looking in. And it uses GPS information from an iPhone or Andorid device to track your location.

If you want walking directions, for example, you’d hear them rather than seeing them. Want to know about historic landmarks you’re near? Bose AR can use audio to tell you about them so that instead of reading lines of text you can hear someone tell a story or even hear audio reenactments of historic events.

While you might not the same kind of wow-factor from augmented audio as you do from visual augmented reality apps that can insert Star Wars characters in front of you, one benefit to an audio-only system is that there’s no camera to creep out the people you’re looking at (and no display to distract you).

Developers will have to add Bose AR support to their apps, but Bose says it’s already working with makers of popular apps including TuneIn, TripAdvisor, Yelp, Strava, and ASICS Studio.

The company also working with academic researchers at MIT Media Lab and NY Future Reality Lab to develop new experiences. This sort of technology could have interesting applications in the education and tourism space. I imagine it could open the door to a whole new type of interactive walking tour at museums or historic sites.

The Bose AR SDK will launch this summer, along with “limited quantities” of an updated Bose AR headset.