Since ARM doesn’t actually manufacture its own chips, it remains to be seen whether companies like Qualcomm, MediaTek, or Samsung will actually adopt the new designs. But according to ARM’s press materials, the new technologies do bring some significant improvements over their predecessors. 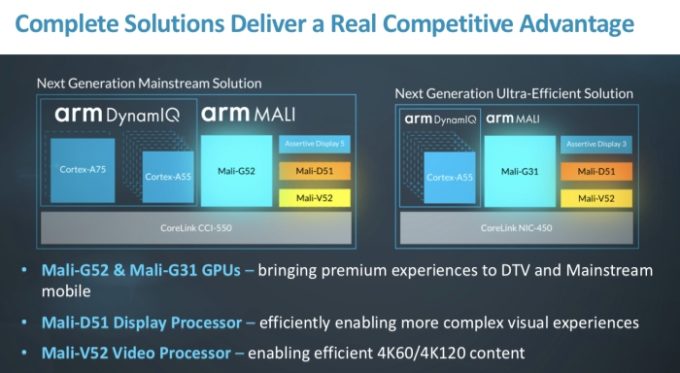 First up are ARM’s new graphics processors. The Mali-G52 is said to offer up to a 30 percent performance improvement over the Mali-G51, while also bringing a 15 percent enhancement in energy efficiency.

Perhaps the biggest change is that the company is promising up to 3.6x the performance for machine learning tasks.

The Mali-G52 is still one of ARM’s “high area efficiency” designs, rather than a “high performance” design, which means it won’t offer the same kind of performance as a Mali-G71 or G72 GPU.

Meanwhile, the new Mali-G31 is the company’s latest “ultra-low power” GPU. It’s basically designed to fill the slot that’s long been occupied by the ARM Mali-400 line of GPUs.

This new mainstream display processor borrows some features that had previously only been available in the company’s premium version, including HDR support and ARM’s Komeda architecture.

It also supports 4096 x 2048 content at up to 60 frames per second, twice the scene complexity available from a Mali-DP650 display processor, 50 percent better memory latency, and 30 percent lower power consumption.

The new video processor is available with between 1 and 4 cores, supports 4k60 video decoding, 4k30 encoding, and a 20 percent boost in encode quality (which means that you can get the same quality of video with a 20 percent lower bitrate, helping save storage space and/or bandwidth).

One use case that might seem a bit odd in the west is the ability to decode and play 16 HD videos at once… something that ARM says is common with Chinese TV boxes, where users see live previews of available programs in a 4×4 grid. 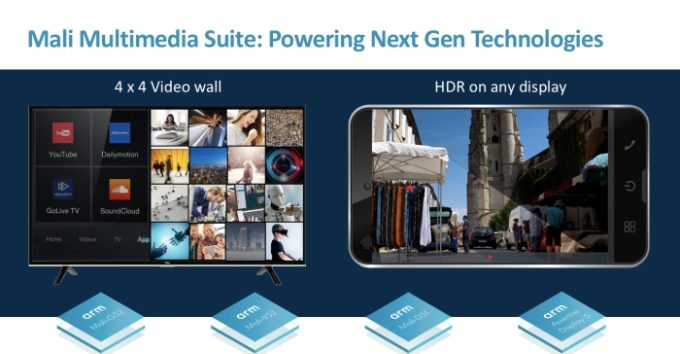 Is that something you’re likely to need in your next phone? Probably not. But it does provide an idea of just how much you can do with ARM’s mid-range and mainstream graphics technologies.