The GPD Win 2 is a handheld gaming PC that ships with Windows 10. But it’s basically got the guts of a laptop or tablet and so it’s capable of running different software.

GPD sent me a prototype to test, and so far I’ve had fun playing some PC games, set it up like a desktop to get some work done, peeked under the hood, and figured out that the keyboard is perfectly functional, but not something I’d want to use for an extended period of time.

But what if you want to run something other than Windows? For the most part that’s not a problem. But you may run into a few issues. 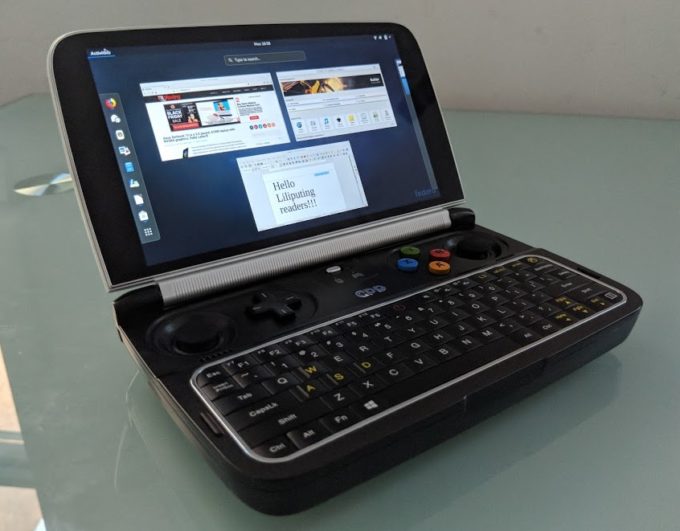 First of all, it’s pretty easy to boot the GPD Win 2 from a USB flash drive. So I had no problem trying a bunch of different GNU/Linux distributions.

But I didn’t bother to install any to the built-in storage because I couldn’t find one that worked with the computer’s touchscreen or game controller buttons out of the box.

It’s worth noting that my demo unit is a prototype. In fact, it’s an updated prototype. GPD sent out an earlier batch of Win 2 prototypes to some other testers more than a month before mine arrived, and The Phawx posted a YouTube video showing Ubuntu 17.10 working on his test unit. He notes that the touchscreen and gamepad work, but the Win 2 didn’t sleep properly when he closed the lid, so he had to manually put the computer to sleep or shut it off when it wasn’t in use.

My demo unit has an updated design and there may be some hardware or software changes that keep Linux distributions from recognizing the touchscreen or gamepad out of the box.

Hopefully those issues will be resolved by the time GPD ships the finished hardware later this year. And maybe if I had some more advanced Linux skills I’d be able to figure out how to install drivers to get things working. But out of the box, the three things that didn’t work on any Linux distro I tried were the touchscreen, the gamepad, or sleep. 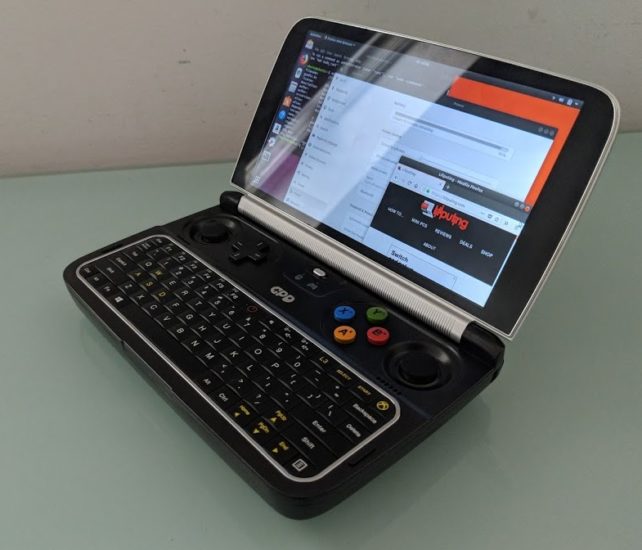 That said, most other things worked. The keyboard functioned properly. You could use analog stick and hardware buttons to move and click a mouse cursor. WiFi and Bluetooth work. HD video and 3D games played without problems.

In order to boot from a USB drive all you have to do is hit the power button on the GPD and then press the Esc or Del keys repeatedly when the GPD logo shows up in order to enter the BIOS/UEFI settings. 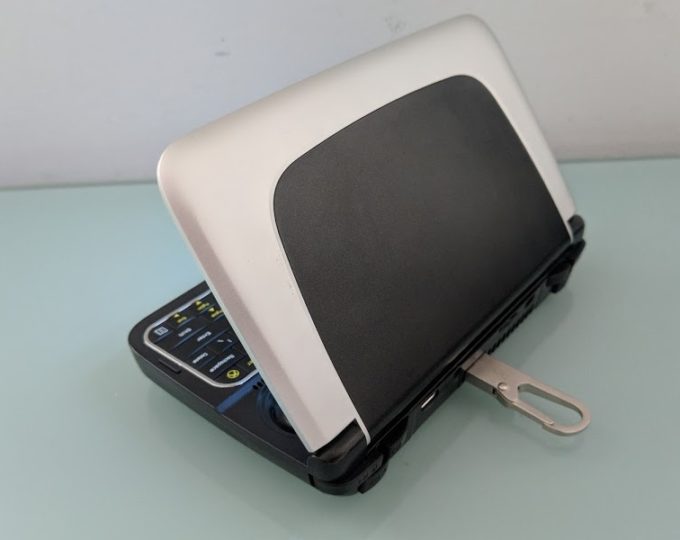 There are a ton of options you can mess around with, including CPU and voltage options that allow you to overclock the CPU. I haven’t really messed around with those, but I know that some other testers have been able to improve performance on same games by overclocking… although that will probably reduce battery life a bit. 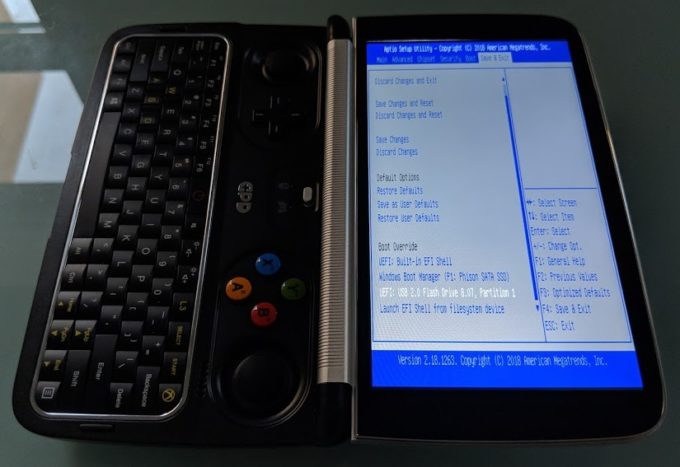 Anyway, all of the settings will be sideways, because the GPD Win 2 thinks that portrait is landscape or something. That can make navigating a little tricky, but use the arrow keys to go to the last tab (Save & Exit), and then move to the bottom of the page until you find a section labeled “Boot Override.”

Choose the device you want to boot from. It’ll probably say something like “UEFI: USB 2.0 flash drive” and then hit enter.

From there, follow the instructions to run an operating system without installing it unless you’re absolutely certain you do want to install it to the Win 2’s solid state storage (where you can either replace Windows 10 or attempt to set up a dual boot system). 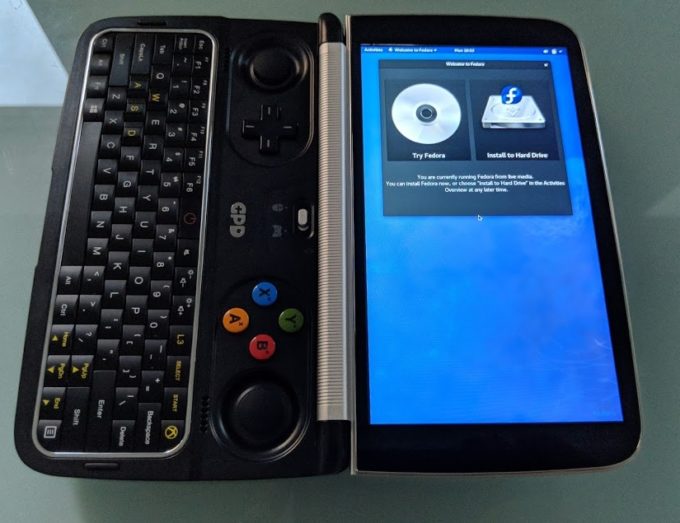 Every single GNU/Linux distribution I tested also had a sideways screen at launch. But it was easy to switch to landscape orientation in most of them… although ironically the way to do that was to open the Display settings and choose “portrait left.” Like I said, the Win 2 seems to think landscape is portrait, and vice versa. 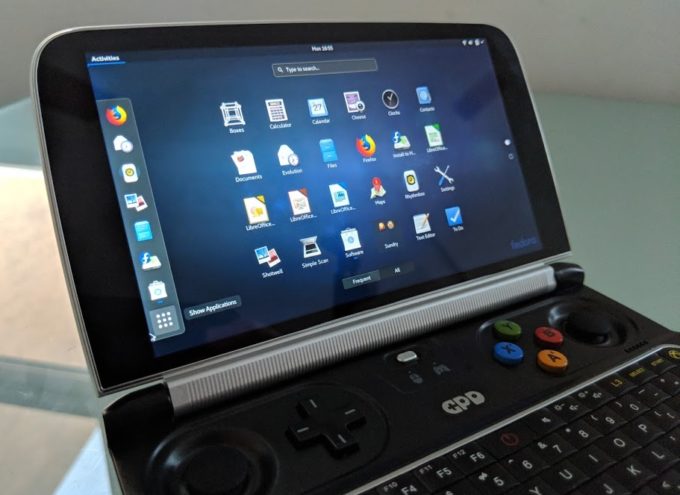 Anyway, once you get everything right-side-up, it’s pretty easy to connect to WiFi and start using the Win 2 like a general-purpose Linux PC.

I was able to stream 4K videos from YouTube using the Firefox web browser (I know the Win 2 has a 720p display, I just wanted to see if playback was smooth… and it was). LibreOffice lets you create and edit documents. 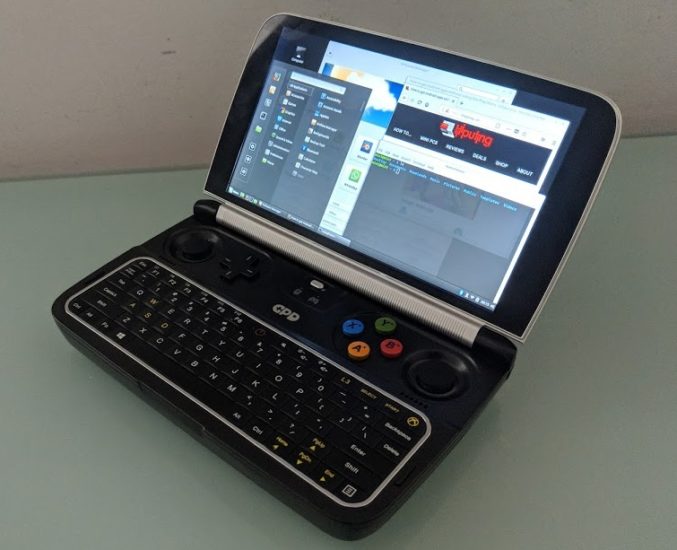 You can also download and install third-party apps using terminal commands or your operating system’s built-in software center. So I loaded SuperTux (a 2D Super Mario-like game) and SuperTuxKart (a 3D Mario Kart-like game) and found that they both played smoothly.

I also found that while both games thought there was no gamepad/joystick connected and neither could recognize the left analog stick, they did recognize the D-pad. In fact, they thought the up, down, left, and right buttons corresponded with the W, A, S, and D buttons on the keyboard. So I was able to map the D-Pad as if it were part of the keyboard, which made playing these two games a lot simpler. 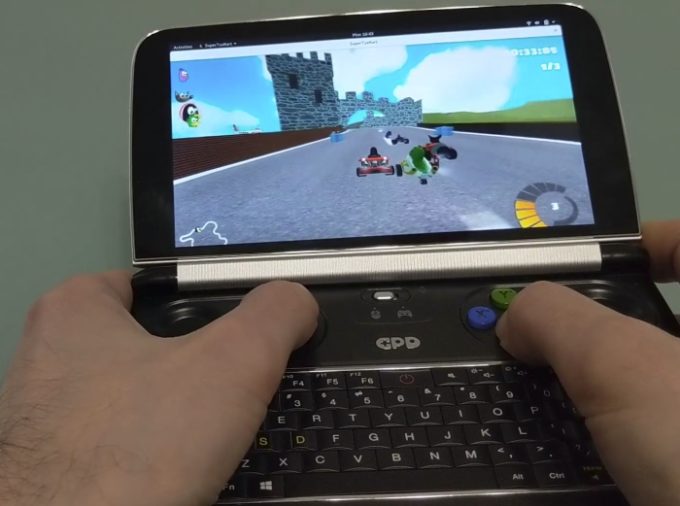 Since Steam already works (with full game controller support) on Windows 10, I didn’t bother trying to install Steam or any heavier-duty games in Linux.

Overall I’d say that for now Linux on the GPD Win 2 is a bit of a mixed bag, at least for the prototype I’m testing. It’s usable, but I can’t think of a lot of reasons why you would really choose it over Windows 10 on this particular device… unless you either really hate Windows or really know what you’re doing and think you might be able to get the non-working hardware to function properly.

That said, there is a way to have the best of both worlds. The GPD Win 10 ships with the Windows 10 Fall Creators Update pre-installed, which means you can use the Windows Subsystem for Linux (WSL) to install Ubuntu or OpenSUSE from the Windows Store. 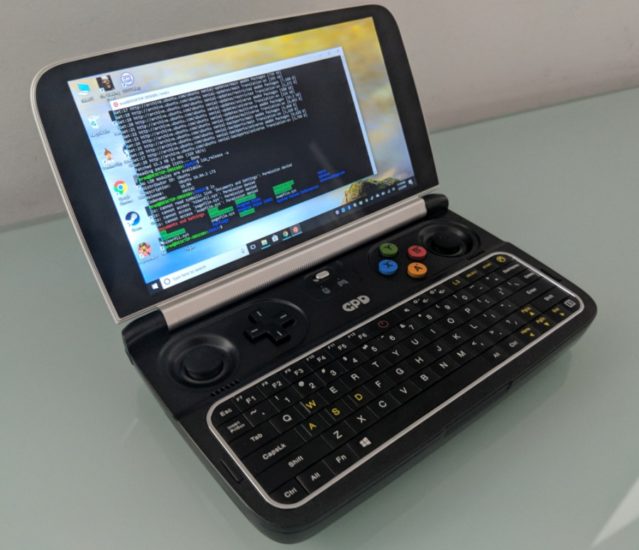 Doing that lets you open a Bash terminal and run Linux software using a command line interface without leaving Windows. More adventurous users can even try installing an X server to run Linux apps that have a graphical user interface.

The GPD Win 2 is up for pre-order for $649 through an Indiegogo campaign, and it’s expected to ship in may, when the price will likely go up to $699.

Update: The GPD Win 2 Preview is out, and just for kicks I decided to shoot another Linux video, this time showing Ubuntu 17.10: