Hardkernel’s been making Raspberry Pi-like single-board computers for even longer than the Raspberry Pi Foundation, although Hardkernel’s ODROID line of devices don’t get as much attention as those from their high-profile competitor.

But that hasn’t stopped Hardkernel from cranking out new models on a regular basis. The next is a tiny computer with a Rockchip RK3399 hexa-core processor, 4GB of RAM, 4K support, and the ability to run Debian Stretch 9.3, Ubuntu 18.04 or Android 7.1

It’s called the ODROID-N1 and it should be coming soon for around $110… although if there’s enough demand the company may also produce a “Lite” model that would sell for $75.

Update: Due to component supply issues, the ODROID-N1 has been canceled. Instead the company plans to launch an ODROID-N2 with a more powerful processor and LPDDR4 memory by the end of the year. 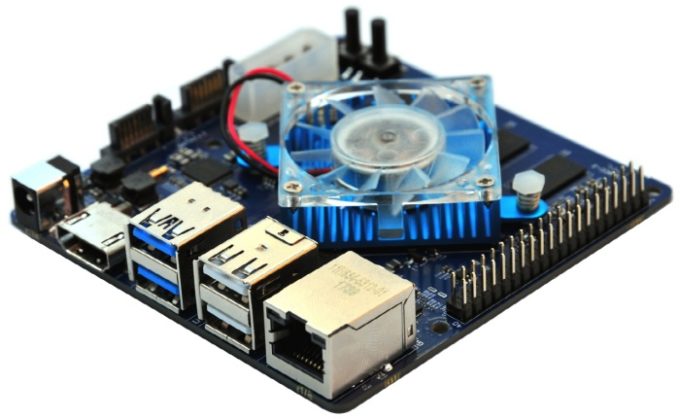 The ODROID-N1 is a single-board PC that measures about 3.5″ x 3.5″ x 0.8″ and which features all the ports you need for basic computer usage along with a 40-pin GPIO connector.

The proposed ODROID-N1 Lite model would have most of the same features, but it would ship with 2GB of RAM instead of 4GB and it wouldn’t have the SATA ports.

You can find benchmarks and performance notes, plus details about optional heat sink and fan solutions at the ODROID forum. And before you ask, it looks like there is at least some support for hardware-accelerated graphics and video in Linux.