Intel is throwing its hat in the smart glasses ring, with a new platform called Vaunt. They glasses come in several different styles and work with prescriptions, and generally look and feel like an ordinary set of glasses… but when you’re wearing them you’ll be able to see what looks like a screen in front of your right eye.

The Verge got an early look at Intel’s Vaunt glasses and reports that the company will launch an early access program for developers later in 2018. 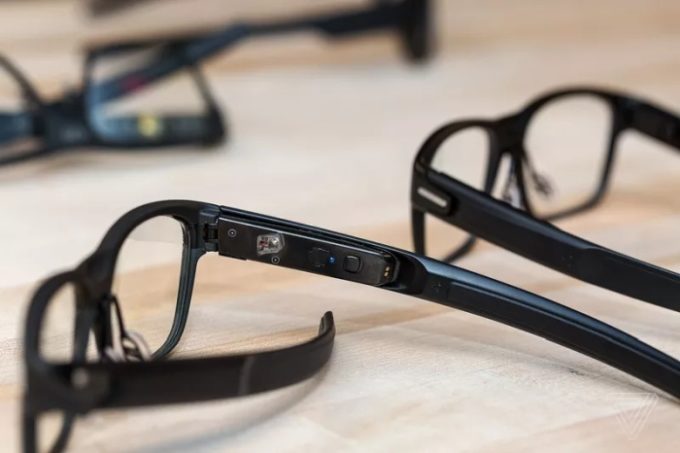 Intel obviously isn’t the first company to develop a smart wearable heads-up display. One of the highest profile examples has been Google Glass, which was originally launched as a revolutionary new product category that would one day be aimed at consumers… and which eventually became something that factory workers and medical professionals might use on the job.

Vaunt strips back some of the features included in Google Glass. There’s no speaker. There’s no camera. And the glasses weigh just 50 grams, including the lenses, batteries, processor, Bluetooth chip, and a laser projector (using VCSEL technology) that paints a 400 x 150 pixel image onto the lens, where it’s reflected back to your eye.

The low-power laser doesn’t do full color. It’s a red monochrome projector only, so expect to see more text than graphics.

The idea is that Vaunt pairs with an iPhone or Android device and displays notifications about things like incoming calls, text messages, or navigation directions.

It’s easy to ignore the display when there’s nothing you need to look at. But when a new message pops up, you’ll probably spot it in your peripheral vision and you can check the message with a quick flick of your eye rather than by pulling out your phone or even lifting your wrist to look at your smartwatch.

Not only does the relatively simple technology allow Vaunt to be light-weight, but it also helps with battery life: while Google Glass only runs for a few hours at a time, Vaunt is designed to last all day (up to 18 hours). It can do that because a lot of the work is actually happening on your phone, with the glasses mostly using power for the Bluetooth connection and the projector.

The Verge’s Dieter Bohn says the demo unit he tested didn’t have a microphone, but Intel is considering adding one so that Vaunt can work with Alexa, Google Assistant, or other voice assistants. You’d be able to ask for directions, recipes, or sports, news, or weather updates and see them at a glance without using your phone or listening to a speaker.

Overall, Vaunt isn’t so much a standalone device as a new way of interacting with your existing device… most likely your smartphone. Think of it like a display: your desktop PC is still a PC even if you don’t plug in a monitor. But it’s a lot easier to interact with when you can turn on a screen and look at the user interface. Your phone already has a screen, but it’s not that useful when it’s stuffed in your pocket. Vaunt is an always-on screen that can show a subset of information from your phone without your having to do anything special.

There’s no word on when Vaunt will be available to the public, how much it’ll cost, or if it’ll eventually wind up being an enterprise-only product like Google Glass has become. But The Verge says Intel plans to start offering early versions of the hardware to developers later this year in hopes of getting them to create third-party apps and experiences for the platform before it’s released more widely.

It’s also possible that by the time Vaunt is ready to go, it won’t just be an Intel project. The company is reportedly looking to sell a stake in its Augmented Reality division so that Intel and that partner would bring Vaunt to market together. Among other things, that could mean Intel is looking for a company with more experience selling products through retail channels… like eyeglass stores.

Fun fact: Intel filed for a trademark on “Vaunt” in November, covering augmented reality glasses and computer software for VR and AR, among other things.