Intel has been making big strides with its integrated graphics technology in recent years, to the point that gaming-focused mini PCs and handhelds with Intel HD graphics aren’t a complete joke.

But you still get better graphics performance with a discrete GPU, which is why Intel is partnering with AMD to launch its first Intel CPU + AMD GPU processors this year. And the company hired AMD’s chief GPU architect Raja Koduri last year to help develop new graphics technology in-house.

Now Intel is showing off a prototype for an upcoming discrete GPU.

Update: It turns out Intel presented a paper describing a new power management technique for exiting GPU technology rather than a new discrete graphics solution, contrary to earlier reports. According to an Intel spokesperson: 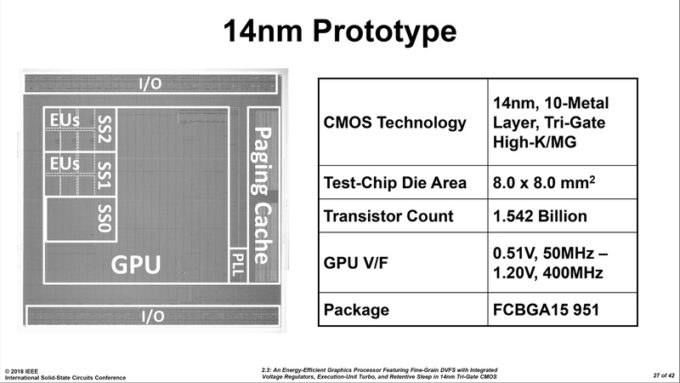 According to PC Watch, Intel announced the new graphics processor at the ISSCC event in San Francisco.

It’s still very much a work in progress and it’s unclear when it’ll be ready to ship, or if Intel will ever ship this particular GPU. It could be more of a demonstration project, and at this point it seems to be designed to bring better graphics performance to low-end PCs, which means it’s not going to be competitive with the latest high-end graphics cards from AMD or NVIDIA.

But here’s what we know o far:

You can find more details and a bunch of presentation slides at PC Watch (Google Translate version if your Japanese is rusty).

Correction: Intel is working on discrete graphics, but it didn’t just unveil a prototype