Google is bringing its latest augmented reality platform out of beta. First announced last year, ARCore is a set of tools software developers can use to create apps that superimpose virtual objects on real-world scenes using a smartphone’s camera and other sensors.

It’s not as sophisticated as Google’s Project Tango, which also relied on specialized hardware for better precision. But that means ARCore can run on millions of devices that would never have supported Tango, which is probably why Google killed off Project Tango to focus on ARCore.

Now the company says ARCore is out of beta and it’s compatible with 13 different smartphone models at launch (or 100 million phones in the wild, to put it another way). 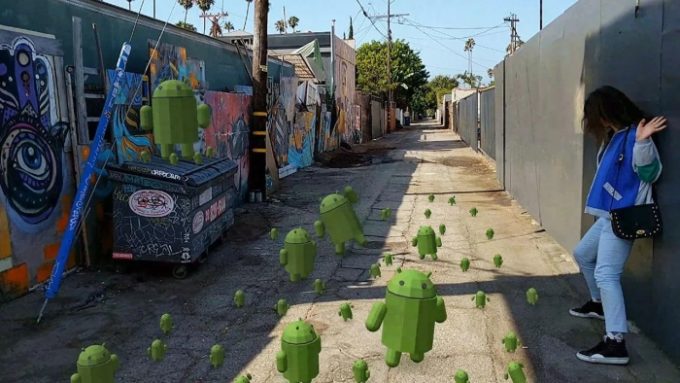 Google says its working with additional phone makers to launch new devices with ARCore support, and it’s likely we’ll see a few of them launched at Mobile World Congress next week.

Now that ARCore 1.0 has been released, developers can publish apps that make use of the ARCore SDK to the Play Store. But Google says the updated SDK also adds new features including support for placing virtual items on textured surfaces rather than just flat surfaces.

Google is also promising to roll out Google Lens to more devices. Initially available only on Pixel smartphones, Google Lens lets you get information about items in a photo you snap with a phone’s camera.

For example you can take a picture of historic building or landmark and get more information about it. And Google says in the coming weeks it will add new features including the ability to snap a photo of a business card and then add the associated details to a contact on your phone, as well as the ability to take a picture of a dog and look up its breed.

Google Lens is coming soon to all Android and iOS devices with the latest version of the Google Photos app… although it’ll only support English at first.