Windows RT may be a dead platform, but it is a desktop version of Microsoft Windows designed to run on computers with ARM-based processors. So it’s not all that surprising that one of the first things people started to do after WP Internals 2.3 made it possible to flash custom ROMs on Lumia smartphones was to try running Windows RT on those phones.

While we wait for Microsoft to release the ARM-compatible version of Windows 10 that’ll power the upcoming Asus NovaGo, HP Envy x2, and Lenovo Miix 630, this is about the closest thing you’ll find to a full desktop version of Windows running on a smartphone.

At first, independent developers had a hard time getting things like sound and graphics to work properly. But now Ben Wang has posted a video showing a Lumix 640 XL running Windows RT with graphics and (some) audio.

At this point sound is running over Bluetooth rather than through the phone’s internal speakers. But the video does show Windows RT 8.1 with hardware-accelerated graphics for video playback and web browsing, leveraging the phone’s Qualcomm Adreno 305 graphics.

While Windows RT was designed for laptops and tablets, it looks virtually identical to Windows 8.1 for desktop computers. The key difference is that it only supports applications downloaded from the Microsoft Store rather than legacy (Win32) applications. The upcoming Windows 10 on ARM software will use virtualization to allow Win32 apps to run on devices with ARM-based chips.

What Ben Wang’s work does show is what a phone-sized device looks like when running a desktop-style version of Windows. The icons, toolbars, and other design elements are obviously a bit on the small side, making it tough to interact with everything using touch alone. But hook up an external keyboard and mouse and you should be good to go. Connect an external display and you should basically be able to use the phone like a desktop.

Theoretically, that’s what you were suppose to be able to do with Continuum for Phone, a feature baked into recent versions of Windows Phone that allowed devices with sufficiently powerful hardware to connect to external displays to let you run phone apps in a desktop-like environment. But it wasn’t particularly popular, and the list of compatible apps wasn’t very great.

Microsoft is positioning its upcoming Windows on ARM software was a platform for notebooks and 2-in-1 tablets. But an open question is whether we’ll eventually see phones that run Windows on ARM.

That would essentially give you a desktop operating system in a pocket-sized device. In order for that to be truly useful, Microsoft would probably need to bring a phone-sized user interface to Windows on ARM, as well as telephony features. But if that happens, you may actually be able to use a single device as a phone and a PC depending on whether you’re using it in standalone mode or with external hardware (mouse + keyboard + display) connected. Power users may even be able to use desktop mode on the phone itself if the need arises. 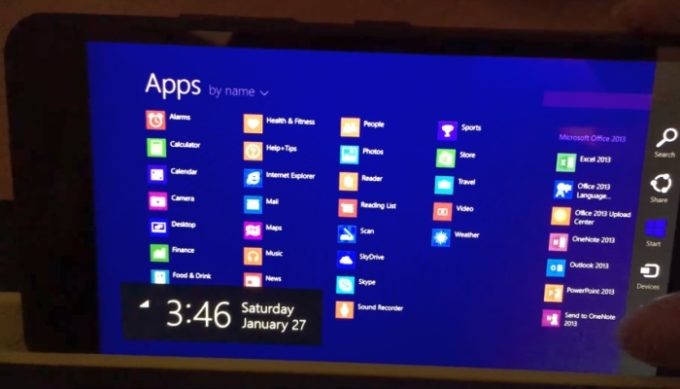 And Ben Wang’s video provides a pretty good example of what that could look like… on aging hardware with software that’s been hacked together. But if Windows RT 8.1 can run on a 5.7 inch phone with a Snapdragon 400 processor, 1GB of RAM, 8GB of storage, and a 720p display, it’s kind of fun to think about what would be possible on a phone with truly modern hardware.