Microsoft is rolling out a new build of Windows 10 to testers, and it’s packed with a bunch of (mostly minor) new features. One of the more intriguing is a new Diagnostic Data Viewer app which lets users see exactly what diagnostic data their computer is sending to Microsoft.

Folks have been complaining for years that Microsoft is collecting data from users, even if you’ve enabled all of the privacy features offered in Windows 10. While the new Diagnostic Data Viewer won’t necessarily let you keep the software company from gathering information from your machine, at least you’ll be better able to see which data Microsoft is collecting. 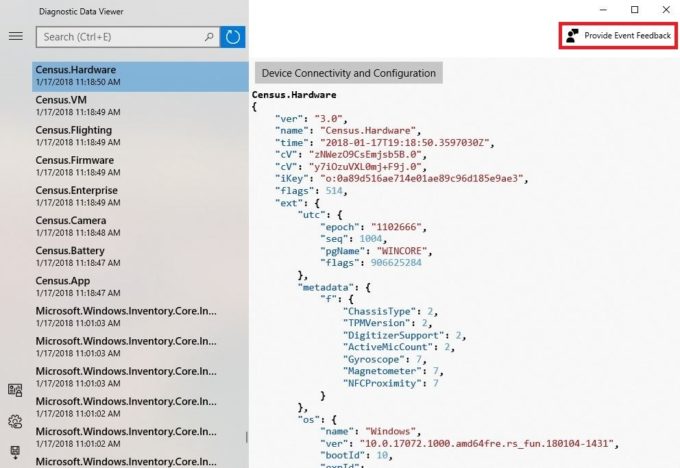 Another change in Windows 10 Build 17083 for PC is a new Fonts page in Settings that gives you a preview of installed fonts, lets you see what text will look like in that font, and also shows a preview of fonts with multi-color capabilities, among other things.

Users can also now find and download fonts from the Microsoft Store.

Microsoft has updated the recently introduced Quiet Hours feature by introducing three modes (priority only, alarms, only, and off), and the name has been changed to Focus Assist. Don’t ask me why. Quiet Hours makes more sense to me.

You can now setup Windows Hello face, fingerprint, or PIN logins from the lock screen. You can choose which Universal Windows Platform apps (from the Microsoft Store) have permission to access pictures, videos, or documents folders. There are new options to delete multiple activities from your Timeline by deleting everything from a certain day or hour. And you can choose whether automatically hiding scrollbars should be a thing or not (you can disable the feature to keep them always visible).

Most of these changes will probably roll out to all users when Microsoft releases the next major update to Windows 10 (code-named “Redstone 4”) sometime in the next few months. One feature that won’t be included in Redstone 4 is “Sets.”

Microsoft introduced Sets in November, as a way to let users group multiple apps together as if they were browser tabs so that you can group together related documents, web pages, or other program windows and flip between tabs the same way you’d flip through currently opened websites in a browser.

Sets isn’t ready for inclusion in Redstone 4, so Microsoft has removed it from the latest test build, but promises it’ll be coming back in the future.