My smartphone has 64GB of storage space. My laptop has 256GB, or four times as much.

But soon you’ll be able to buy a microSD card with twice as much storage as that.  Integral Memory has unveiled the first microSDXC card with 512GB of storage capacity, which ain’t half bad for a device about the size of a fingernail. 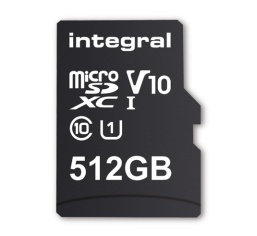 The new card meets the UHS-1 Class 1 specification and Video Speed Class 10 (V10) with read speeds up to 90 MB/s. Integral notes that write speeds are “lower,” but doesn’t say how much lower.

While there are faster storage cards available, it should be fast enough for capturing 1080p video or storing a heck of a lot of photos, videos, music, or other data. It’s the highest capacity microSD card we’ve seen since SanDisk introduced a 400GB microSDXC card last August.

Integral Memory says the new card should be available in February, and it’s appropriate for use in phones, tablets, action cameras, drones, and home security cameras, among other things. There’s no word on how much the new storage card will cost, but “a lot” seems like a safe bet.

29 replies on “Say hello to the first 512GB microSDXC card”