Rumor has it that this year Samsung will release its first phone with a flexible OLED display that lets you fold the phone in half. The Samsung Galaxy X would essentially let you have a tablet-sized display when you want one, a smaller phone-sized display the rest of the time, and the ability to fold the whole thing and put it in your pocket.

It’s been in the works for years, but recent reports suggest that Samsung was showing off the Galaxy X in closed-door meetings during the Consumer Electronics Show in Las Vegas earlier this month, and that the phone could come to market later this year.

But Samsung isn’t the only company developing a folding phone with a flexible display. LG has been working on one for just as long (I think), although LG’s efforts haven’t grabbed as many headlines. A recent patent suggests that LG is still working on its folding phone though. 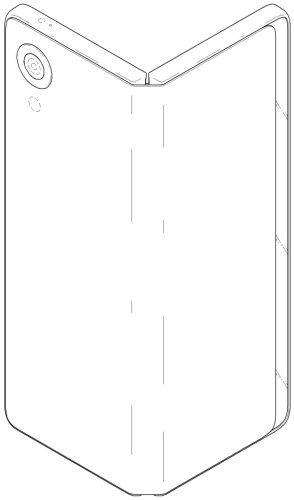 The patent, which was filed last summer and published last week by the World Intellectual Property Organization (WIPO), describes a folding phone with a flexible display.

It looks like LG’s version of a folding phone has a display that folds inward, which means that when you unfold the phone you have a large screen. When you fold it, the screen is entirely or partially covered. But there are two ways that LG may let you interact with the phone even when the screen is folded in half.

One iteration includes some sort of display panel that lets you see things like the time on the “front” of the cover when the phone is folded in half.

A second, more intriguing idea is a solution that has the phone fold in such a way that part of the screen is still visible through a transparent section, allowing you to see the time, notifications, or whatever other content LG wants to show along the edge of the phone.

Keep in mind that companies file patents for all sorts of ideas that never actually make it to market. I think it’s highly likely that LG is working on a folding phone with a flexible display, because that seems to be one of the big new ideas that companies are chasing in order to convince you that your current phone is outdated. But it’s unclear if the phone LG eventually releases will look anything like the drawings shown in this patent application.

via GSMInfo and The Verge