Lenovo is the latest company to launch an external graphics dock that lets you add a desktop-class graphics card to your laptop or PC just by plugging it into a Thunderbolt 3 port.

But the new Lenovo Thunderbolt 3 Graphics Dock is a bit more svelte than most of the products in this category that I’ve seen… and it also has something most others lack: a graphics card.

The good news is that if you spend $399 on this dock, you don’t need to spend more money to buy a graphics card. The bad news is that the card it comes with isn’t all that fancy. 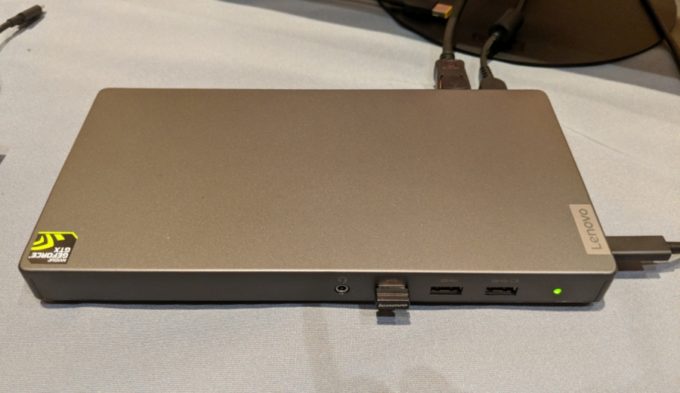 The dock comes with an NVIDIA GeForce GTX 1050 card, which Lenovo says is good enough to power a Windows Mixed Reality headset with refresh rates up to 90 Hz.

But if you want a high-end gaming card, this isn’t the graphics dock for you.

You can also theoretically use it to charge your laptop if you’ve got a supported model that charges via a USB Type-C connector.

It’s a somewhat attractive idea. It’d just be nice if it were upgradable in case you’re satisfied with the GTX 1050 graphics card today, but think you might want to replace it in a year or two and don’t want to have to buy a new card and dock.