If you have an iPhone and a Mac you can use Apple’s Continuity software to take phone or respond to text messages from your computer, among other things. Dell wants to offer the same functionality to Windows users with Android phones or iPhones.

All of the company’s 2018 consumer desktop and notebook computers will ship with a new application called Dell Mobile Connect. If you install the free companion app from the App Store or Google Play, you’ll be able to see notifications from your phone on your Dell PC, respond to text messages, take calls, and more.

Android users will also be able to mirror their phone’s display on their PC, allowing you to scroll through Instagram, respond to chat messages, or even play some games using a keyboard and mouse… although I wouldn’t get carried away. Frame rates are on the low side, and there’s a bit of lag (40ms latency, I’m told), so you’ll probably want to pick up your phone to watch videos or play games that require a speedy response time. 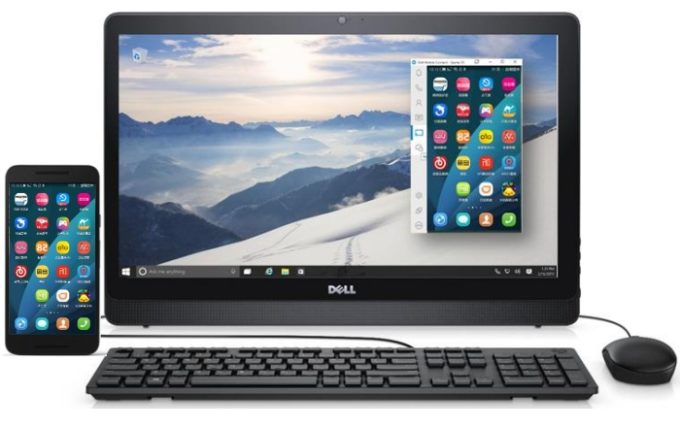 Dell Mobile Connect pairs your phone with your PC via a combination of Bluetooth and WiFi Direct. Dell assures me that the impact on your phone’s battery life will be minimal… unless you make heavy use of the screen mirroring feature, since it only works when your phone’s screen is on. So it’ll drain your battery at least as quickly as actively using your phone would.

The screen mirroring feature isn’t available for iPhone users, because Apple doesn’t offer the tools necessary to make that work.

Whether you’re using Android or iOS, you can respond to phone calls or text messages on your PC. And since Dell realizes you may not want people to see the details of incoming messages on your computer display (where they’re a bit more exposed to the world than on your phone display), when a message first pops up you’ll just see that there is a notification. You’ll have to mouse over it to see who its from or what it says.

If you take a call on your PC you’ll be able to talk through your computer’s built-in mic and listen via speakers or headphones, but the call is actually being routed through your phone. So if your phone’s battery dies mid-call, the call will end. If you want to switch from the PC to your phone, you can just tap a button in the PC app and then pick up your handset to continue talking using your phone’s mic and speaker.

Dell Mobile Connect will be exclusively available on Dell PCs, and requires Android 5.0 or later or iOS 10 or later.