A group of Samsung employees is showing off a side-project called S-Ray at the Consumer Electronics Show. It’s a set of portable directional speakers that transmit audio so that you can only hear it from certain angles.

Put on a neckband with speakers facing up and you’ll be able to hear music, podcasts, or other audio, but someone sitting right next you on the couch shouldn’t hear a thing.

S-Ray is one of several new projects from Samsung’s C-Lab incubator, and the company previewed the project earlier this month. I stopped by the S-Ray booth at CES for a demo, and the technology really does seem to work. But it’ll probably be at least a year before it comes to market, if it ever does. 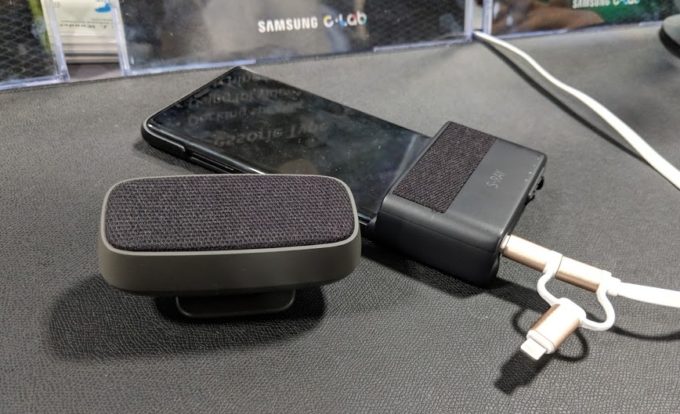 The team working on S-Ray is showing off a tiny speaker that you can hear when you’re right in front of it, but which is silent if you’re off-axis by just a few degrees. The idea is to offer several different form factors, possibly including a neck band, a portable speaker, and maybe a speaker that you can clip onto a phone to provide directional audio.

While this isn’t the only implementation of directional audio, typical applications are usually for stationary installations like museum displays. S-Ray is different because it’s a small, battery powered speaker meant to be taken with you, or even worn.

But before S-Ray is something you can actually spend money on the developers say they want to improve the audio quality and work with Samsung to decide whether S-Ray would be sold as a Samsung product or if the S-Ray team should spin off and form a new company.

That latter approach is the one that’s been taken for several other projects that got their start through Samsung C-Lab, including Sgnl, a watch that turns your fingertip into a Bluetooth handset by conducting audio through your skin so that you can hear sound just by placing your finger on your ear.

Speaking of Sgnl, they’re showing their latest models at CES this year, and plan to begin shipping devices soon. I tried it out again this week, and still found the audio to be quiet and muffled. It’s a neat idea, but I’m not sure I’d actually want to take a call in a noisy environment using Sgnl.

Anyway, for now S-Ray is still in its early stages. But the technology does work, and it’s kind of trippy to experience firsthand.

2 replies on “You can hear S-Ray portable directional speakers, your seatmate can’t”