Another year, another road test for my work gear. The Consumer Electronics Show officially kicks off on Tuesday, but I’m currently on my way to Las Vegas because pre-show craziness kicks off on Sunday.

As usual, I’m trying to keep my reporting kit pretty light-weight, since I’ll be lugging it around in a backpack all day. I guess it’s a good thing that I write about small computers and practice what I preach.

So here’s a look at what’s in my gear bag this year. It looks a lot like last year’s kit, with one major upgrade: this year I’ll have a phone with a better camera and better battery life since I traded in my Nexus 5X for a shiny new Pixel 2. 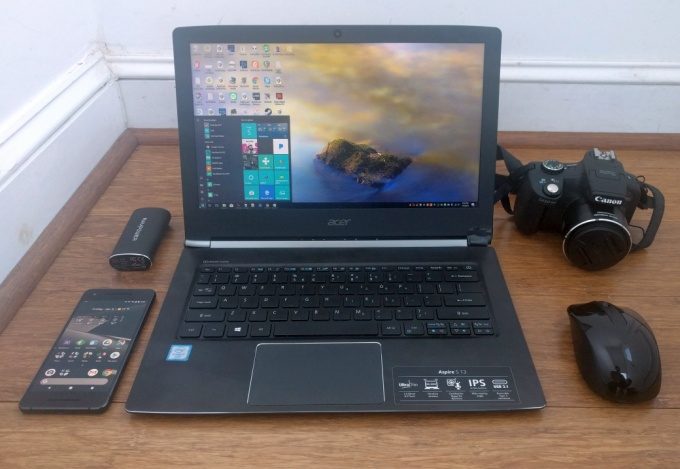 For the second year in a row I’ll be packing this notebook with a 13.3 inch display, an Intel core i7-6500U processor, 8GB of RAM, and 256GB of solid state storage.

It weighs just 3 pounds, still gets around 5-6 hours of battery life on a good day, and features a matte touchscreen display and backlit keyboard, making the notebook easy to use in a variety of situations.

The biggest down-side to this laptop is probably its noisy fan, but that’s not really an issue when using it at a show where I’ll be surrounded by thousands of other journalists and conference attendees making their own noise.

Acer also ommitted an Ethernet jack on this laptop, but I’ve got a USB adapter that I can use in a pinch if I need to plug in the laptop in locations where WiFi may not be the best option.

I’m also packing a Microsoft Wireless Mouse 900 which I’ll use whenever the laptop isn’t on my lap, as I tend to prefer a mouse to touchscreen or touchpad input.

My smartphone has been my jack-of-all-trades tool at the show for the past few years. That’ll be more true than ever in 2018.

The Google Pixel 2 has one of the best smartphone cameras around, and I’ll probably use it to take most of the still photos you’ll see in Liliputing’s CES coverage this year. That’s a change from previous years, when I used a dedicated camera for that. I’ll probably still use a separate camera for video though, which I’ll explain below.

Here are a few other things the Pixel 2 will be helping me with over the week:

Oh, and I guess it’s handy for communications. It is a phone, after all. I may also use it to take notes, but I usually pack an old-school paper notebook for jotting my nearly illegible notes quickly on the go.

While the Pixel 2 does a pretty good job with video thanks to optical and electronic image stabilization, I’ve discovered that my old Canon PowerShot SX50 HS has a few advantages for shooting video of gadgets.

First, it does a better job of singling out my voice from crowd noise when I’m behind the camera than the Pixel 2 does.

So while I’d been hoping to leave the PowerShot camera at home, it’s going to be in my bag again this year… primarily for video. It’ll also come in handy if I need a superzoom. I don’t expect to cover many press conferences this year, but that’s where the 50X optical zoom is a nice feature.

And it’s always nice to have a spare camera in case my phone battery dies.

The Pixel 2 gets significantly better battery life than my old Nexus 5X, but heavy camera use does run down the battery pretty quickly.

Speaking of battery life, this portable charger will help me top off the phone in a hurry if I need a little extra juice during the day.

While I usually get all-day battery life from the Pixel 2, I’m not usually running around town for 16-18 hours a day making heavy use of GPS and camera functions.

This battery supports 2.4A output for fast charging and I have a short USB Type-A to Type-C cable that lets me place my phone and the battery in my pocket and charge the phone while I’m on the go.

There are plenty of newer batteries with dedicated USB Type-C ports, faster charging, and other features this model lacks. But it was cheap when I picked it up and it still does the trick. I’ll probably hang onto it for another few years as long as it still holds a decent charge.

My Kindle Paperwhite will be keeping me company on the 5 hour flights to and from Las Vegas, along with my Amazon Fire HD 8 tablet (for watching videos if I get tired of reading).

I’m also packing a new pair of Samsung Level On Bluetooth noise canceling on-ear headphones I picked up recently when they were on sale for $70. The audio quality is better than that on most lower-cost models I’ve tested and the noise cancellation works well… under the right conditions. It does a great job of filtering out background sounds like my refrigerator’s hum when I’m at home. But when I tried using them on a recent bus trip they actually amplified some of the creaking noises the bus made in transit. I’ll be curious to see how well they work at reducing airplane noise, which is what many active noise canceling products are really designed to do.

I’m staying in downtown Las Vegas rather than on the strip this year, so I don’t expect to spend a lot of time in my hotel room. But for any time I do spend writing before hitting the sack or heading out for the day, I’ll have my UE Mini Boom Bluetooth speaker to keep me energized with music.

And I’m packing my trusty portable humidifier in the hopes that it’ll keep me from waking up with bloody noses from the dry Las Vegas air.

Normally Las Vegas isn’t all that much warmer than Philadelphia at this time of year, but I’m flying out of Philadelphia on a day when the high temperature is forecast to be 16 degrees in my home city, and the high in Vegas is supposed to be 68. So that’s kind of exciting.

That said, I’ll also be packing one more thing: some sudafed. Often I catch a cold at CES. This year I’m heading to Las Vegas after finally kicking one that I picked up just after Christmas. I’m hoping I don’t need to self medicate to get through the week, but it’s always good to be prepared.